Marvel Studios has a plan going as far out as 2028

Bloomberg Businessweek magazine will publish an article tomorrow featuring Kevin Feige, Marvel Studio’s President of Production. For those unfamiliar with Kevin Feige, he is the force behind all those Marvel Comic Book movies you love today, at least from Marvel Studios. In 2007, it was Feige’s encyclopedic knowledge and vision that made Marvel Studios appoint him the man in charge of all things Marvel Film related. 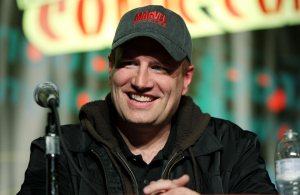 It all started with Iron Man in 2008. As you look through the years of films released by Marvel Studios, you can see Feige’s vision come to life film by film. Feige’s leadership and motivation to have Marvel Studios move forward together with a cohesive plan, has made the Marvel a stellar example of how to build a cinematic universe done right.

In the feature with Businessweek, Feige talks about Marvel Studios starting from the ground up. He discusses the decision to cast Robert Downey Jr. as Iron Man, releasing Thor as a standalone film before other well known characters, and other examples of necessary risks it took to get things started. These steps were all part of a well thought plan from a person who truly understands these characters and their fans. Feige also discusses the long-term potential of the films. We have known for sometime that Marvel has films planned all the way through 2021, with two films released per year.

I recently learned that Kevin Feige literally has a road map that is sort of like a blue print for future Marvel projects posted up on a wall in his office. The projects for Marvel reportedly goes all the way up to 2021 .  However, Feige states in the feature, “It’s like looking through the Hubble telescope. You go, ‘What’s happening back there?’ and I can sort of see it. They printed out a new one recently that went to 2028.”

It is truly remarkable and also exciting to see that Marvel has a plan for the next 14 years. Marvel is very clever in the way they run their business; signing actors/actresses to long-term deals and planting small Easter eggs in their films that may or may not lead to other things. They keep their options open. Their structured brand, “Marvel”, is now synonymous with quality blockbusters.  Now other studios like Fox and Sony, who own Marvel properties, are attempting to establish their universe like Marvel Studios. I won’t go into what’s rumored to be released for the next few years after Avengers: Age of Ultron, although expect to hear some announcements at this year’s Comic Con in San Diego.

Along with DC, I am looking forward to potentially seeing  4, 5 or even 6 Comic Book films per year. The Comic Book adaptations are here to stay and we as fans love that.

What do you think Marvel has planned for the next 14 years? Express your thoughts below!