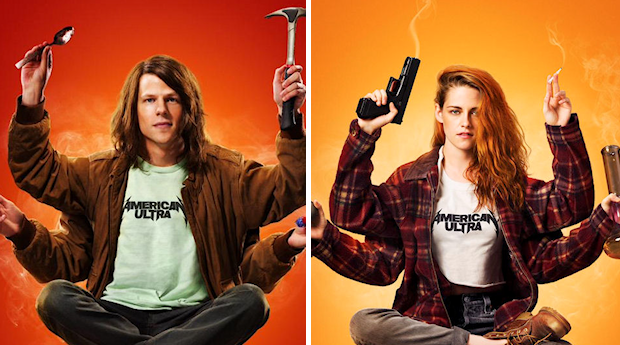 American Ultra stars Jesse Eisenberg as Mike Howell, a stoner low key individual who loves his girlfriend (Kristen Stewart). When the C.I.A suddenly targets him for extermination, Mike begins to discover he possess skills of an assassin through a history involved in governmental experiments. The C.I.A. soon quickly remembers how dangerous of an asset Mike is.

Directed by Nima Nourizadeh, who won me over with Project X. However, I’m going to put this film in his loss column. This film is about a pothead with combat skills on the level of a John Wick. What I was hoping for with American Ultra was a funny/action packed flick. There’s not much of either in this film.

The problem is not so much the actors, who were perfectly cast for this role. Both Eisenberg and Stewart have pretty good chemistry, which is what I expected with this being their second collaboration. The problem lies within the script, which is written by Max Landis, who made a name for himself with Chronicle. The dialogue is a big problem when the film tries too get serious. Topher Grace stars as the antagonist, and I’ve never bought him as a bad guy in any roles he’s tried doing. Every time he speak, I wish he’d just shut up.

The action sequences are somewhat interesting, but there wasn’t enough creativity, or enough action period. The filmmakers had an opportunity to make Eisenberg’s character a total bad ass, but we only get glimpses.

I feel like I’m criticizing this film a bit too much, its not a complete letdown. I did like the chemistry between the leads. Walton Goggins (Django Unchained) played his character perfectly, and was cast correctly to play a psycho, short minded, violent human being. The film in the beginning does a nice job establishing who Eisenberg’s character is and the struggles he deals with prior to being activated (to protect and kill).

That’s about as far as I can go with positives. There were some small roles given to recognizable talents that I found to be an absolute complete waste like John Leguizamo (Chef) and Bill Pullman.

In the end, American Ultra may look like a fun film, but you’ll be disappointed by the end. There are some redeeming moments in the film. However, you’ll earn more value for your time renting on Redbox.