Check out Jacob’s spoiler-heavy review of ‘Popstar: Never Stop Never Stopping’, from the comedic minds of The Lonely Island and Judd Apatow.

Judd Apatow’s fifth directorial, Trainwreck, is a movie I’ve had high hopes for and I’m glad to say that it did not disappoint. Overall, it’s a far better outing than Apatow’s last few movies (This is 40, Funny People) however, not as good as some of his best work […]

This is probably one of the more exciting weekends for Summer movies, at least for me! We got two very different but equally appealing movies coming out this weekend with Trainwreck starring Amy Schumer and Marvel’s Ant-Man starring Paul Rudd. It’s no secret how much I love Marvel and their cinematic universe […]

Although I haven’t been a fan of Judd Apatow’s work as of late, there’s no doubt he’s a comedy genius. The guy who has brought us The 40-Year-Old Virgin and Knocked Up is now bringing us a new comedy titled Trainwreck, which was written by the star of the movie, the hilarious […] 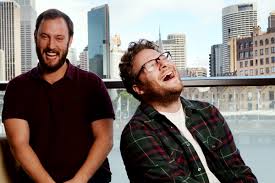 Neighbors was released a couple weeks ago and it was yet another hit for Seth Rogen.  Although it was not directed by him and/or Evan Goldberg, Neighbors was successful due to Rogen’s consistency in delivering quality comedy films which has mostly included lifetime buddy Evan Goldberg by his side. Rogen and […]