The Highs & Lows of ‘Avengers: Endgame’

It is finally here ladies and gentlemen! Avengers: Endgame has made its way to theaters and has taken the world by storm. The movie i a box office smash and is setting and destroying records left and right! In its opening weekend it took in $1.2 billion dollars internationally and $350 million dollars domestically! The crazy thing is that a movie like this is going to definitely have legs and is only going to bring in more and more money. The movie itself is a work of art and is beyond what anything we could have imagined. So while it seems like this list could be never ending, we are going to try and give you a handful of highs and lows that we took from Avengers: Endgame.

One thing that a lot of people were worried about coming into the movie was the thought of how time travel was going to play into the MCU and if it would be too confusing. While time travel wasn’t ever confirmed before the release of the movie, it was something that everyone pretty much figured out on their own especially with the white Quantum Realm suits. How Marvel went about time travel was actually very easy to follow and interesting especially due to its uniqueness compared to other movies. The MCU has decided to ignore the time travel rules that we have seen in movies such as Back to the Future, Bill & Ted’s Excellent Adventure, and of course Hot Tub Time Machine, which states that affecting the past changes the present.

Basically how it works is if you go back in time and change the past, you are creating an alternate timeline, while the present will remain the same. But if you reset the changed events in the past by going back and fixing what was changed, then that timeline will go back to normal. It sounds a lot more difficult then it needs to be but in the end it worked out really well and did an amazing job at keeping it simple and still telling a compelling story.

Low: No Hulk vs. Thanos Rematch

One of the most shocking things in Avengers: Infinity War was how Thanos was able to beat the living heck out of Hulk so easily in the beginning of the movie. I don’t think anyone expected Hulk to be taken out so easily by Thanos, so we all figured that Hulk wouldn’t stand for being defeated and humiliated like he was, son at some point we figured he would get his revenge. Well we were all wrong about that. Not only did we not get a rematch but Hulk never even came in contact with Thanos in the movie at all! It was one of the most shocking things because we all felt that it was pretty obvious that they would fight again.

We know that Banner and Hulk have now merged into one being, Professor Hulk, Hulk wasn’t useless in the movie. As we saw he ended up being the one to snap his fingers and bring back all the living things that Thanos had wiped away from the original snap, including all of our favorite characters. He also suffered a serious injury from the snap which left the whole left side of his body badly injured which is probably a good enough reason as to why he was never going to be able to fight Thanos due to him being wounded. Still it kind of sucks that we won’t ever get to see the two heavy weights go at it one more time. 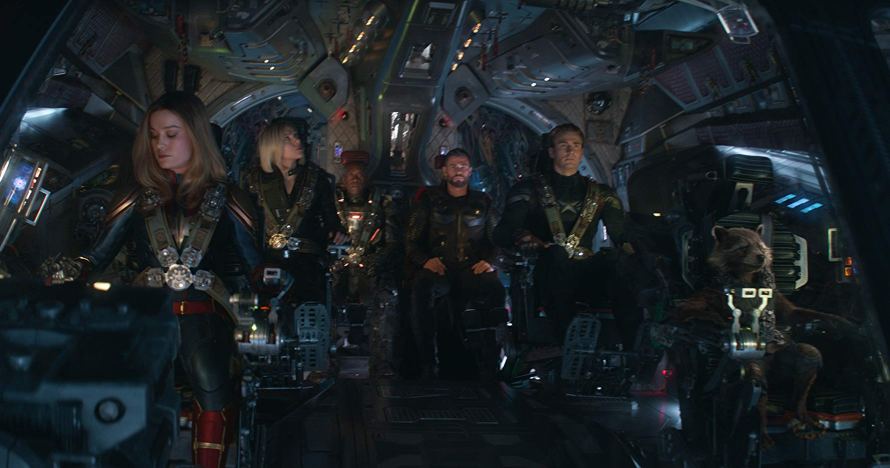 One thing that this movie did not lack was action. The movie was pretty much non-stop thrilling and even when the movie slowed down, you still found yourself compelled to every word that was being said. As for the action in the movie, you got it from so many different levels that we never found ourselves cheering at the screen so many different times. Some of the best action moments in the movie that we saw was Hawkeye/Ronin when he dispatched the Yakuza in Tokyo, Japan. He did it so violently and ruthlessly which was such a change for Marvel. Captain America vs. past Captain America when they were at Avengers: Tower. It was so cool seeing the two throwing the shields at each other and fighting each other with the same style. While there is many more the ultimate action scene is the end of the movie.

The final act of the movie we see Thanos and his army attacking the Avengers: Headquarters destroying it to ruble. Just when you think Thanos and his forces are about to win, all of the dusted heroes along with the remaining Asgardians, the Wakandan military, and a heavy amount of Sorcerers come through the sling ring portals to fight along side the Avengers. We then are treated to the greatest battle scene in the history of the MCU and quite possibly movies. We see all the female superheroes assemble next to each other, Iron Man and Pepper Potts in the Rescue armor, and of course the coolest thing of all, Captain America fighting with Mjolnir! It was something that was beyond expectaions and was amazing to see.

High: The Finale of the Infinity Saga

We all knew coming into this movie that this was going to be the culmination of the previous 21 movies in the MCU. 10 years worth of Marvel movies all lead up to this final movie. As Doctor Strange said in Avengers: Infinity War, we’re in the endgame now. So with that Marvel was tasked with closing out a story that was 10 years in the making, which introduced us to 100’s of characters we know and love, and finishing it in a way that we were all going to walk out of the movie and be satisfied with our 10 year investment. What we got was all of that and then some.

We all knew from the beginning before we even got into this movie, was that the story revolved around the six characters that we were introduced to 10 years ago, the original Avengers. Iron Man, Captain America, Hulk, Thor, Black Widow and Hawkeye. These six characters are the foundation of the MCU, so if Marvel was going to end this saga of movies, they had to do it in a way that would do these six characters justice. Each character had their own demons when they came into the MCU.

Tony Stark/Iron Man was a man who was haunted by his fathers legacy, while trying to establish his own life. Steve Rogers/Captain America was a man struggling to grip with the past while living in the present. Thor was a god hungry for war and greatness, struggling to accept his feelings and compassion for others. Bruce Banner/Hulk were two separate people sharing a body, each side struggling for control. Natasha Romanoff/Black Widow was a spy haunted by her past, trying to make amends and create a life she thought could never exist. And Clint Barton/Hawkeye, a man struggling with the choice between his family and his duty.

In the end all six characters for the most part found what they were looking for in one way or another. Tony was able to live the life he never though he could have, even if it was for a short time, while still saving the universe. Cap was able to due his duty as a soldier, while being able to live the life he never thought he could have. Thor found that there is a balance between a duty and living your life. Bruce was able to take the best of both worlds and create one that benefits both. Natasha was able to complete her mission while finding something she never was able to have, a family. While Hawkeye was able to come back to the one thing that mattered most to him, his family. It is a touching ending to what was 10 years and 22 movies in the making. It is something we will never see again in movies and will forever hold a special place in our hearts.

The movie is a masterpiece and a love letter to all Marvel fans who have been on this journey for the last 10 years. It wraps the saga up in a pretty bow and is a present that is going to keep giving and giving for generations to come. We could go on with tons and tons of Highs but these are just some of the huge ones that we felt that needed to be noted. To say this movie had lows is a joke. If we were to give you them it would just be nit picky things that aren’t things that are worthy of pointing them out. Overall the movie is amazing and deserves all the praise it deserves. The actors, directors, screenwriters and anyone else involved deserve a standing ovation as this truly is an amazing way to close out the saga.