Adam Sandler is making his Netflix movie return this year with a new comedy that doesn’t sound quite bad. As we know Sandler has hit a bit of a slump when it comes to his movies in the past years. If you don’t count the Hotel Transylvania movies because they are animated and don’t actually feature him acting, his last good movie was probably Grown Ups 2 in 2013 and calling that a good movie is kind of a stretch. Sandler was one of the pioneers when it comes to releasing streaming movies on Netflix when he released The Ridiculous 6 in 2015. Now he is taking another shot at a Netflix movie with his newest movie Murder Mystery.

The plot of the movie is:

A New York cop and his wife go on a European vacation to reinvigorate the spark in their marriage, but end up getting framed and on the run for the death of an elderly billionaire.

The movie sounds pretty typical of a Sandler movie, where he no doubt is the New York cop, his wife will be played by none other than Jennifer Aniston. This is not the first time Aniston has teamed up with Sandler in a movie, as they both stared in the 2011 movie Just Go With It. The movie saw them start out as co-workers and best friends who ended up falling in love and getting married. Ironically now this movie follows the two actors as a married couple, but the movie is not a sequel or related in anyway.Terence Stamp will star as the movies murdered billionaire with Luke Evans, Gemma Arterton, David Walliams, Erik Griffin, and John Kani rounding out the cast. 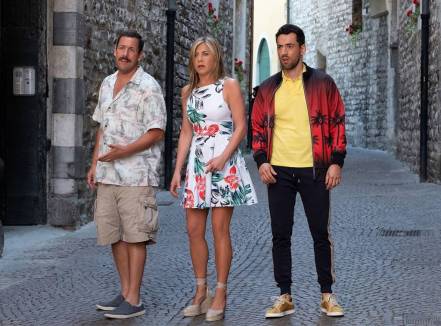 Netflix has also released the first two images from the film as well. The first photo shows Sandler with Aniston as they are both dressed up on what we can maybe assume is the private yacht that the movie begins on. Sandler is rocking a very New York cop mustache while Aniston looks great in a red dress. The second picture shows them probably on the run after the death of the billionaire they are framed for murdering as the clothes are more vacation street clothes. The movie sounds pretty good especially with Aniston in the co lead role, but who knows when it comes to Sandler movies. The movie will be released on Netflix in June 2019.

So what do you think movie lovers? Are you excited for Murder Mystery starring Adam Sandler and Jennifer Aniston? Does the fact that it is a Netflix streaming movie make a difference? Let us know what you think in the comments below!