Fox Searchlight, one of the newest additions to Disney’s vault, has released a brand new clip for their upcoming biopic of The Lord of the Rings author J.R.R. Tolkien, titled Tolkien. The film was directed by Dome Karukoski and stars Nicholas Hoult as the young author, with the story following him through many years of his life, which include those at 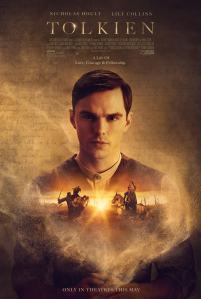 school with his friends all the way up through his time in World War I. That time period, as well as those he experienced them with, inspired him, resulting in the beloved stories from the mystical land known as Middle-Earth that ended up become today’s phenomenon.

While trailers thus far have quietly teased the imagination behind such a creative writer, this clip dives a little deeper into how Tolkien used those around him to spark the true imagination that ended up being a pivotal piece for him going forward. I personally didn’t know the story of Tolkien before I saw the first trailer for the film, but I immediately became interested because his story seems unlike most writers that surrounded him. Obviously, many writers use their own experiences to inspire themselves, but what makes Tolkien standout from the others is that his closest friends and family, including his beloved Edith Bratt, are the core to it all. While none of them are Hobbits or talking Dragons, his mind wouldn’t have continued to imagine if he didn’t have those oh so special people around him.

Obviously, if you haven’t noticed already, this story has interested me as much as it can to anyone. It’s a very personal and endearing story that had great implications to not just writing, but cinema as well. Whether or not you love, like or like me, appreciate them for what they are, his stories changed a lot of things for a lot of people. His story deserves to be told, and thankfully, his story doesn’t seem like the typical author biopic that we may have seen a time or two before. Hopefully director Dome Karukoski and star Nicholas Hoult are able to capture the true magic behind this creative genius.

How do you feel about Tolkien? Have you liked the trailers? Did you know of his story before this film came to light? What about Hoult in the role? Also starring Lily Collins, Colm Meaney, Anthony Boyle, Patrick Gibson, Tom Glynn-Carney, Craig Roberts, Laura Donnelly, Genevieve O’Reilly, Pam Ferris and Derek Jacobi, Tolkien will be in theaters on May 10th.

TOLKIEN explores the formative years of the renowned author’s life as he finds friendship, courage and inspiration among a fellow group of writers and artists at school. Their brotherhood strengthens as they grow up and weather love and loss together, including Tolkien’s tumultuous courtship of his beloved Edith Bratt, until the outbreak of the First World War which threatens to tear their fellowship apart. All of these experiences would later inspire Tolkien to write his famous Middle-earth novels.