Watch the First Trailer for ‘The Addams Family’ Animated Feature

The first official trailer for The Addams Family has been released. While this property originally debuted as a single-panel cartoon way back in 1938, it continued to live on through a live-action TV series, a TV movie, and the most well-known on the bunch, a pair of live-action films in ’90s that went on to become staples for that generation. This 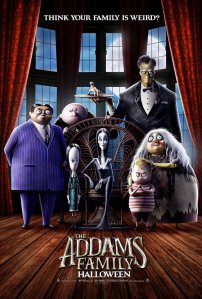 incarnation was directed by Conrad Vernon and Greg Tiernan, the duo behind Sausage Party, but you wouldn’t know it by this first trailer.

It’s evident that the movie is solely directed at the young generation. Sometimes, especially with a property like this one, studios will try their best to make an animated feature that will attract both children and adults, but that doesn’t seem to be the case here. The tone and more specifically, the jokes are fitting for the younglings, which could end up disappointing many fans who were looking for something along the lines of the films from the ’90s. While that is the case, a positive part of all of this is the voice cast. It’s pretty damn strong, with Oscar Isaac, Charlize Theron, Chloë Grace Moretz, Finn Wolfhard, Nick Kroll, Bette Midler and Allison Janney all taking on roles. Sure, it doesn’t seem fit for the older generation, but this movie will absolutely crush later this year as it has a great release date in early October that will carry through to Halloween.

What do you think of the trailer? Does it seem like a flat out kids movie or does it interest you as an adult? Were you hoping for something a little bit more mature? How about the voice cast? Which actor/character combo is your favorite? Sound off in the comments below! The Addams Family will be released in theaters on October 11th.