Milla Jovovich Has Arrived in the First Clips for ‘Hellboy’ 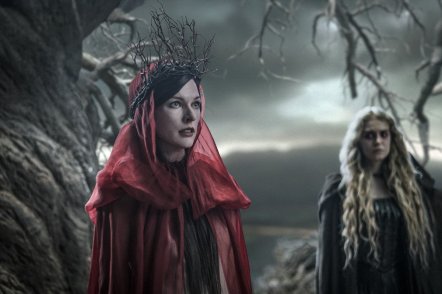 Lionsgate Films has unveiled the first pair of clips for their upcoming reboot of the Hellboy franchise. Directed by Neil Marshall and starring Stranger Things‘ star David Harbour, this action-packed story will follow the legendary half-demon hero who discovers a revenge-seeking ancient sorceress has been resurrected in the modern world. Now, suddenly, Hellboy is caught between the world’s of human and supernatural, where he is now hell-bent on stopping the Blood Queen before everything comes to an end.

It seems as if audiences are split down-the-middle on this reboot. While trailers have played with different tones so far, many can argue that it does in fact play to the true character of Hellboy. His name is Hellboy, and he’s a half-demon from the belly of Earth. Is it not expected to see an apocalyptic style film where everything is thrown at him? I understand the idea of comparing this story to Guillermo del Toro’s 15 years ago, but del Toro took a much more personal approach to the character. I haven’t personally read any comics or stories it’s based on, but I’ve read enough to feel safe saying that this version looks closer to what it’s based on, even if it looks absolutely ridiculous.

The biggest plus sign next to this movie as it goes into theaters next week is its R-rating. He battles monsters from Hell and monster creations, why would his story be rated R? It’s absolutely nothing against del Toro’s approach, as I thoroughly enjoy those movies, but Hellboy was brought above ground by the Nazi’s to be rated R. While I don’t have high expectations, I’m expecting to at least have some popcorn fun with it, and hopefully it can deliver.

Check out the new clips below, and after you do, leave some thoughts in the comments about the reboot. How do you think it looks? Is Harbour a good fit for the character? Do you like its over-the-top approach? Also starring Ian McShane, Daniel Dae Kim and Sasha Lane, Marshall’s Hellboy brings hell to theaters on April 12th.