Are you a fan of monster movies, such as Kong: Skull Island? If so, you’re in luck! It’s a double whammy, as it’s been revealed that Skull Island director Jordan Vogt-Roberts will be returning to the genre that we recognize him for and developing an original monster movie as his next project. Not only that, but he’ll be teaming with Michael B. Jordan and his production company Outlier Society to do so.

The report hails from The Hollywood Reporter, who revealed yesterday that Vogt-Roberts’ new “creature feature” will be set in Detroit, the city that he grew up in and continues to have a relationship with. As far as Jordan, for now, it only states that he’ll be producing the film, with no word if he plans on starring in the project.

While it is expected that Vogt-Roberts will helm the project, the report notes that the duo are currently searching for a screenwriter to get the story moving forward. As there is no official script yet and being that it’s very early on in the process, no plot details, outside of the Detroit setting, for what kind of monstrous mayhem Vogt-Roberts is cooking up are known as of yet.

This is a pretty cool partnership between the Skull Island director and Black Panther star. Michael B. Jordan is easily one of the most popular names for anything in Hollywood today. He has continuously proven that he can perform in any role that he’s asked to do. Since he shot into the spotlight a few years ago, it feels like he hasn’t done the same thing twice outside of playing Adonis Creed for the Creed franchise. He isn’t officially starring yet, but if he does, leading this project for Vogt-Roberts would mark his first time in a monster movie. And if it looks and feel similar to what he captured with Skull Island, led by Michael B. Jordan, I’m all for it.

What do you think of this news? Were you a fan of Kong: Skull Island? Do you like that Vogt-Roberts is returning to the monster genre? How about he and Jordan teaming up? Sound off in the section below! As more updates are revealed, we’ll make sure to update the site as soon as possible. 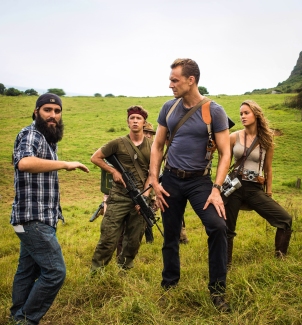