While most of the conversation, at the moment, revolves around Avengers: Endgame, which continues to draw closer and closer, there’s a movie on the horizon that has more than just a handful of fans losing their mind. Godzilla: King

of the Monsters may feel like it’s quite a ways away, but it’s fast approaching as its marketing is quietly beginning. Thanks to Total Film, we have a batch of new images for the monstrous film, which tease the epic match between the titans that both trailers have heavily teased us with.

While we do get new looks at three of the stars in the movie, it’s the images focusing on the monsters that standout. From the moment the first trailer dropped for this movie, even before, it’s the fight between Godzilla and the other three monsters that has been anticipated more than anything. It’s what this little shared universe has been building towards. Of course, it’s the eventual battle between Godzilla and King Kong that we’re most looking forward to, but the undercard fight includes Godzilla, Mothra, Rodan and King Ghidorah? It’s the main event before the main event, and I and a hell of a lot more can’t wait to see it go down.

Outside of the actual fight, the trailers for the movie have been incredible. We’ll have to wait and see how the final product turns out, but at this moment, it looks like it’s going to be one of the biggest and most satisfying movies of the year. If it builds on what director Gareth Edwards was able to do with the first movie, but fix the issues of nothing showing the monsters, this could end up being one of the best blockbusters we’ve seen in recent memory. It has that much potential, not to mention the monstrosity it will be at the box-office. It’s going to be a damn good time at the theater.

What do you think of these new images? How have you liked the trailers so far? Are you losing your mind over it or just going to go check it out? Directed by Michael Dougherty and starring Millie Bobby Brown, Vera Farmiga, Kyle Chandler, Ken Watanabe, Sally Hawkins, Bradley Whitford, O’Shea Jackson Jr. and Charles Dance, Godzilla: King of the Monsters smashes into theaters on May 31st, 2019. 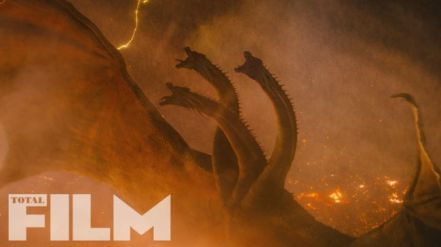