Ever since the teaser poster was released for this years Sonic the Hedgehog, the main concern around the movie was how they were going to translate how Sonic looks on the big screen. Whats worse, is that when we saw the character poster it did nothing to make us think that he was going to look good. In the poster, we saw a shadowed body of the Sonic character that showed a super muscular and not so great looking portrayal of the famous hedgehog. Now thanks to some promo images, we have now gotten our first look at how Sonic is going to look in the movie.

The photos that we have found are that of leaked promo images and while the classic blue hedgehog is definitely represented, it seems that Paramount is planning on making this version of Sonic, a very muscular and almost human like version. As we said before the classic blue that is known for Sonic is still there, as well as his famous red running shoes. While it isn’t the worst thing we have ever seen it just doesn’t seem “natural” if you can call it that. He still looks a little weird and fake. 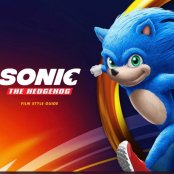 The impression that was given when they first announced this movie, was that he was going to be a realistic character that you could see in the real world, ala Rocket Raccoon in Guardians of the Galaxy or even the Pokemon in Detective Pikachu. This seems like he is going to stand out and not really fit in as a natural character. Personally I think they are trying to give him too much of a humanized look instead of the classic video game hedgehog character and this is what isn’t translating over well. However it is still early in the stages of the movie and isn’t scheduled for release until November 8th.

So what do you think movie lovers? Are you excited about the look of Sonic from the live action version movie Sonic the Hedgehog. Or are you on the fence and hoping that they are still working on his look? Tell us what you think in the comments below!