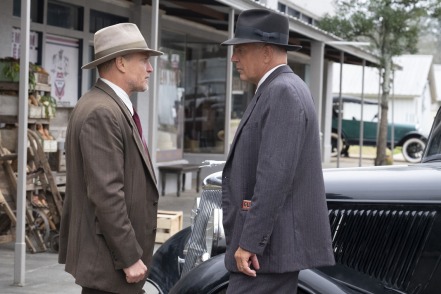 Netflix has released the first official trailer for The Highwaymen. Directed by The Blind Side helmer John Lee Hancock, the film is based on the unbelievable true story of the two legendary lawmen who hunted down the most famous criminals of all-time, Bonnie and Clyde. Played by Kevin Costner and Woody Harrelson, two former Texas Rangers must rely on their gut instincts old school skills to track down and capture the nation’s most notorious criminals when the full force of the FBI isn’t enough.

This is going to be incredible. I absolutely love this trailer. This is the great thing about Netflix, truly. They have so many projects in development right now and we have no idea what’s coming. Unlike other studio’s, who prepare for a trailer release or make it a big deal, the streaming service just drops a trailer out of nowhere and watches as everyone raises their hands up in excitement and anticipation. Remember The Cloverfield Paradox and Triple Frontier last year? Now this trailer may not come off as big as those, but this is a film that everyone should look out for.

The Bonnie and Clyde story is easily one of the most interesting stories that film can use. It’s historic, in so many ways. And rather than just tell that story as true as they possibly can from their perspective, which we’ll no doubt get on a large scale at some point, Hancock has taken a fantastic approach and focused on the unsung heroes of the story, two gentlemen who I didn’t even know existed. Their part in this whole thing is half of the reason why this overall story is so legendary to begin with. And Costner and Harrelson are the perfect guys for these parts. I thoroughly enjoy them both and am very excited to see them dive into these roles.

Check out the first official trailer for the film below. After doing so, leave your thoughts in the comments section! How did you react to the trailer? Do you like the film’s perspective? How about Costner and Harrelson together? Also starring Kathy Bates, John Carroll Lynch and Kim Dickens, Hancock’s The Highwaymen will be released on Netflix on March 29th.

From director John Lee Hancock (The Blind Side), THE HIGHWAYMEN follows the untold true story of the legendary lawmen who brought down Bonnie and Clyde. When the full force of the FBI and the latest forensic technology aren’t enough to capture the nation’s most notorious criminals, two former Texas Rangers (Kevin Costner and Woody Harrelson) must rely on their gut instincts and old school skills to get the job done.