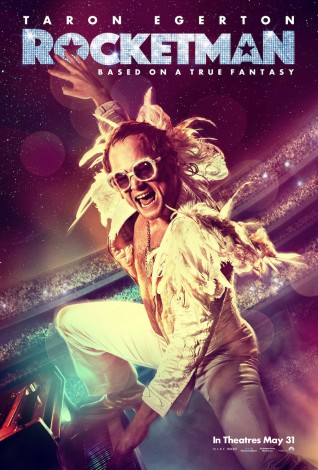 Musical biopics are the new trend in the movie business, and while we wait to see if Bohemian Rhapsody and Rami Malek come away with wins at the 2019 Academy Awards, another major artist is about to get the big screen telling he deserves. We’ve yet to see an official full-length trailer for Rocketman, but the Elton John biopic is already making a name for itself with audiences everywhere. The film is directed by Dexter Fletcher (Eddie the Eagle) and stars Taron Egerton as Elton John in a story that will follow his life both professionally nd personally, but in a way that’s being described as a musical fantasy, making it the most interesting biopic over the last numbers of years.

As I mentioned in our previous post on Rocketman, this film will live or die on its fantasy elements and either how much of it impacts the film or how well done they are, or both. I’m also all on board with it being completely different from the typical musical biopic. It’s pretty funny though. Before coming on to direct this project, Fletcher was originally attached to direct Bohemian Rhapsody before stepping off the project, then to be brought back on set to finish the film when Bryan Singer was fired during production. While he may not have been in charge of that film completely, he’s already successfully completed a paint-by-numbers biopic. It only makes sense for this film to take a drastically different approach.

Another huge aspect of this movie that differs from others such as Bohemian Rhapsody is that its star, Egerton, is the actual voice behind the music in the film. Unlike Rami Malek, Egerton isn’t lip-syncing, and the film’s newest behind-the-scenes look makes sure everyone knows that. To much of no one’s surprise, Egerton’s singing chops match his acting ability. It may be difficult to agree with for those who are Elton John fans through and through, but he’s doing a fantastic imitation of the singer, more than likely one of the best outside of John himself. If this is just a tease for what’s to come for the film, Rocketman is going to be a rousing good time at the theater.

Check out the new featurette below, and after doing so, head down to the comments and leave your thoughts. How do you feel about Egerton not only singing, but him as John? What do you think of the “fantasty” element Fletcher is giving the story? Also starring Jamie Bell, Richard Madden, Gemma Jones and Bryce Dallas Howard, Fletcher’s Rocketman will be released in theaters on May 31st.