It sure does seem like Chris Evans’ time under the red, white and blue shield of Captain America is indeed up. While Avengers: Endgame will reveal it all when it comes to the super soldier, Evans has been quickly finding other high-valued projects that are pointing towards his time in the MCU being up. While it is definitely a very unsettling thing knowing we could not see him sporting the shield as he leads Earth’s Mightiest Heroes into battle anymore, when it comes to Evans, the moves he is making are very exciting. His next major project following Endgame is co-leading Rian Johnson’s murder mystery film Knives Out. That isn’t set to be released until the end of this year, but he’s already locked up his next gig.

While many believe Steve Rogers may bite the dust by the time Endgame‘s credits start rolling, there is still a pretty big chance that the door is left open for the character to return. Yes, Evans has repeatedly expressed his interest in broadening his horizon, and there was even that very cryptic tweet he released as he wrapped filming the movie indicating that he is officially moving on from the character, but it’s very hard to believe that Evans wouldn’t at least consider the idea of returning some day after a break from the universe. Remember when Downey Jr.’s contract was up and he attempted to move on then it just didn’t work? Yeah, he came back for another big go around. So let’s just move on completely just yet.

Anyway! Deadline first reported on this news yesterday, saying that Evans has been casted in Antoine Fuqua’s upcoming sci-fi feature Infinite, which is based on the novel by D. Eric Maikranz called The Reincarnationist Papers. The plot of the story revolves around a man who is haunted by two past lives he didn’t know he had. After doing some research, the man comes to find out that there exists a secret society that’s been around for centuries and is full of other people just like him, but use these abilities to affect and change things throughout history. I mean, it sounds 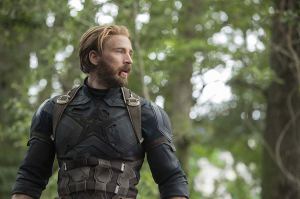 damn exciting and interesting. I can totally see Evans playing this type of role, especially with Fuqua directing it. With it sounding like it could dive a bit into some our most prominent historical events, it could be a visually stunning film with some pretty badass action set pieces.

The key here is the sci-fi portion. That’s not what Fuqua is typically known for, and while I think he can do a decent job with it, decent just doesn’t like enough for this. I mentioned Knives Out above, this sure as hell sounds like a Rian Johnson-like film, as he’s tampered with this type of genre in the past. Again, I’m going to give it a full shot until I see the film, but Fuqua is typically known for a very different type of film, just look at his body of work. This is definitely a film to keep an eye out for, whichever way you look at it.

What do you think of this news? First of all, what are you thoughts on the Evans-Captain America thing? Is he going to die? Will the character retire? How about Infinite? Does the film sound interesting to you? What about Fuqua directing it? Do you have someone else in mind that you’d rather see? No official release date has been given to the film. Stay tuned here at Apocaflix! for more movies news!