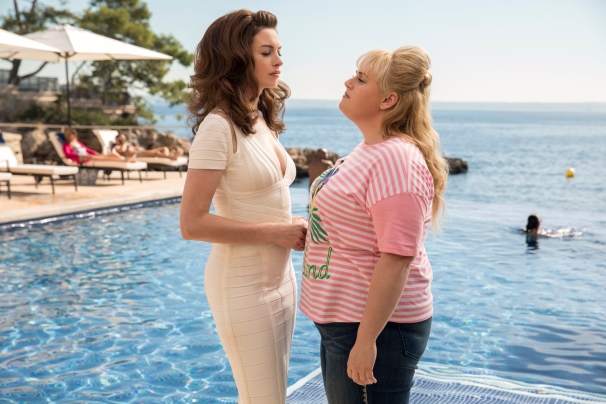 MGM has released the first official trailer for their upcoming comedy The Hustle. The film was directed by Chris Addison, who some may recognize from his work on Veep, and star Anna Hathaway and Rebel Wilson as a female scam artist duo who have team up to take down the dirty rotten men who have wronged them. If that sounds a bit familiar, that’s because it is. This is the gender-swapped remark of the classic 1988 film Dirty Rotten Scoundrels, which starred Steve Martin and Michael Caine.

This project has been a longtime coming. It’s been in the works for quite some time as it was filmed all the way back in 2017. No specific reasons as to why it was pushed from last year, but the studio has placed it in a location where it’s sink or swim, hopefully the latter.

The chemistry between Hathaway and Wilson looks strong enough to be the hook for many movie-goers. The main reason why is because of the roles they are playing. Hathaway has shown time and time again that she can play the upper class woman very, very well. Wilson, of course, was first noticed in a somewhat of a similar role in Bridesmaids, which was then followed by many comedic performances. If their back-and-forth is good, this should be a good time. While it does have something to live up to, it should also be looked at as a standalone, simply because it’s not a sequel or continuation. Hell, it’s even been given a different title, which is what many remakes/reboots make the mistake of doing.

Check out the first official trailer below and make sure to leave your thoughts in the comments section! What did you think of the trailer? How about the Hathaway and Wilson combination? Have you seen Dirty Rotten Scoundrels? Also starting Alex Sharp, Time Blake Nelson and Dean Norris, The Hustle will be released on May 10th.