The first official trailer has been released for A Vigilante. Olivia Wilde stars in the indie film as a once abused woman who has now devoted her life to ridding those of their domestic abusers, while hunting down the husband she must kill to truly be free of her demons. The film has been inspired by the strength and bravery of the real life survivors. 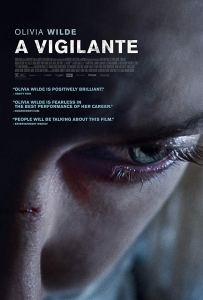 This trailer is truly fantastic. From the footage of Wilde to the beat of her hammering her fists into either a punching bag or dresser, I was completely enthralled by what this trailer has to offer. This film has been around for a while now, premiering at South by Southwest (SXSW) last year, but just now having its first trailer released. It’s not unusual for a film such as this one, but damn am I glad it’s finally headed our way. While it only has a limited release in theaters, hopefully it can make enough of an impact to widen its reach closer to my domain.

Olivia Wilde has had a very interesting career. She fits into different molds and we have seen her true potential as an onscreen presence more than just once. Out of all the moments I’ve seen of her in film, this easily looks like the most powerful of them all. She has completely embodied the gritty and emotionally raw film given to her and it is paying off huge dividends. Pairing with that is a first time filmmaker in Sarah Daggar Nickson, who is already showing incredible promise by creating a piece of art that is challenging, haunting and resilient all wrapped into one.

Check out the first trailer below, and please, leave all your comments, questions and concerns in the comment section below! Did the footage impact you as much as I? Do you typically like Oliva Wilde? How do you feel about the topic at hand? Nickson’s A Vigilante has a limited March 29th release date.

A once abused woman, Sadie (Olivia Wilde), devotes herself to ridding victims of their domestic abusers while hunting down the husband she must kill to truly be free. A Vigilante is a thriller inspired by the strength and bravery of real domestic abuse survivors and the incredible obstacles to safety they face.