If you continuously enjoy the duo of Seth Rogen and Evan Goldberg, you’re in luck. They are once again teaming-up, this time for a political-themed film that stars Rogen himself and Charlize Theron. Don’t worry, this film shouldn’t bring as much drama as their previous political-themed entry, The Interview. Previously titled Flarsky, Long Shot will follow a U.S. Secretary of State, played by Theron of course, who is hoping to become the country’s first female

president. That doesn’t sound like it could cause of ruckus, right?

As for Rogen’s character, he will be playing Fred Flarsky, the character the movie was originally titled after. According to descriptions of the character, he’s a “hard-partying political writer” with “a talent for trouble.” That definitely sounds like a role Rogen can play very well. He also had a huge crush on Theron’s character in the past, and after reuniting for the campaign, they spark an old flame that could lead to Charlotte’s (Theron) run as a Presidential Candidate being demolished thanks to his past. While it does sound like a somewhat of a basic premise, it’s the idea of Theron and Rogen playing these roles that should get you interested. I know that for myself, I will watch Theron in anything.

The film is being dubbed as a romantic comedy in the vein of Knocked Up, as the report suggests. While speaking to Entertainment Weekly, Rogen has this to say about what kind of movie they set out to make:

“We wanted to make a movie that acknowledged the political realities we all live in without trying to make too heavy-handed directives. And at the same time make something that’s highly enjoyable and highly entertaining that appeals to as wide an audience as anything I’ve made.”

He continued by saying that he never could imagine anyone else playing this role other than Theron. She originally signed on as just a producer, where it than morphed into starring alongside Rogen. In the same piece, she explained her hesitancy of accepting the gig:

“If anybody knows me from any kind of comedy, it’s probably the darker comedies that I’ve done that are maybe not considered comedies to a lot of people, that maybe are just horror movies. It’s not my play zone. I explored a little bit, but not to the level of working next to Seth Rogen and trying to keep up with that.”

The movie also stars Alexander Skarsgard as a Canadian Prime Minister, Bob Odenkirk as the President, Andy Serkis, O’Shea Jackson Jr. and Randall Park. How do you think Long Shot sounds? What about the cast? Do you like the first look images? Long Shot will be released on May 3rd, 2019. 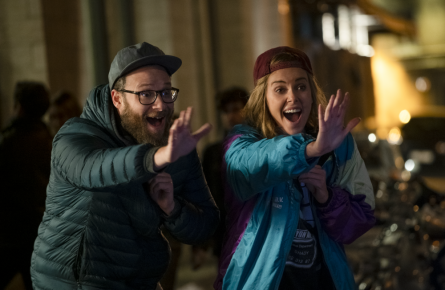