Finally! A New Look at Quentin Tarantino’s ‘Once Upon a Time in Hollywood’ Has Arrived!

While 2019 features some of the biggest movies to ever be released, such as Avengers: Endgame and Star Wars: Episode IX, one film is quietly flying under the radar as one of, may the most anticipated film of the year, Quentin Tarantino’s Once Upon a Time in Hollywood. Tarantino films in general are always some of the most unique films to be released, and that easily continues with Hollywood. Tarantino is giving this film the Inglorious Basterds treatment, meaning he is taking a real life event and putting his spin on the story. This time he’s capturing the horrific events from the summer of 1969, the Manson Family Murders.

Besides that, absolutely nothing is known other than which fantastic cast members Tarantino has rallied up for what could be one of his final projects. And truthfully, for myself anyway, all I need to know is the cast as Tarantino projects are event films for film fans, even though they are considered “blockbuster” movies. So while we wait for a first official trailer or any kind of details about the plot, characters, etc., Vanity Fair has gifted us with a whole new look at the film thanks to very fitting new images.

The cast is led by three juggernauts in Leonardo DiCaprio, Brad Pitt and Margot Robbie, who are respectively playing a faded Western TV star, his stuntman, and Sharon Tate, the wife of Roman Polanski who was brutally murdered by the followers of Charles Manson. The rest of the cast includes (breathe, it’s a long one) Al Pacino, Timothy Olyphant, Lena Dunham, Burt Reynolds, Damian Lewis, Scoot McNairy, Luke Perry, Dakota Fanning, James Marsden, Clifton Collins, Emile Hirsch, Tim Roth, Michael Madsen and Danny Strong. Scoot McNairy, who in my opinion is one of the most underrated actors in the business today, had this to say about his experience filming this movie:

That was probably one of the greatest experiences of my career. Just to watch Quentin be on set and be Quentin, and hold court, was one of the most fascinating things I have probably ever experienced in the movie business. It was an amazing, awesome experience. I would give anything to do it again. I really loved just listening to the guy be an encyclopedia on set. It’s incredible, the amount of information that guy stores in his head. But, it was great. I play a character that’s within a TV show in the movie. I know I’m not supposed to speak too much about it, but I can say that I play a character on a TV show, within the movie.

How can you not be excited about this film? Anyway, check out the rest of the images below, which tease slick sequences and legendary actors meeting up. What do you think of these new images? How about the project? Are you as excited as I am for this one? Is Tarantino your type of director? Sound off in the comments below! 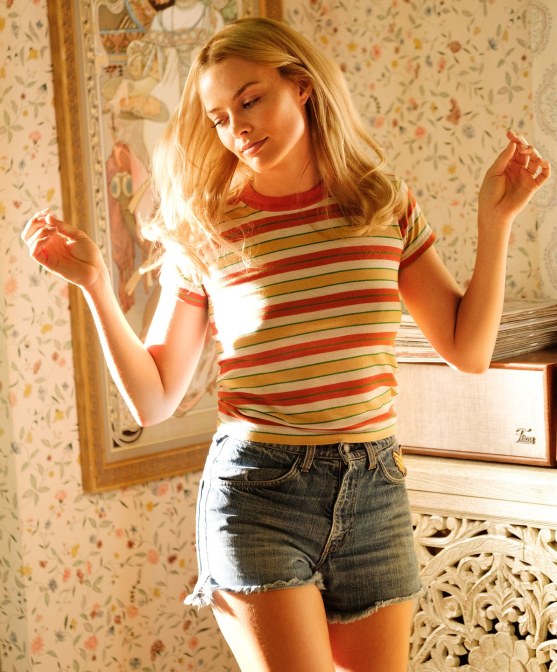