Yes, it’s still January, and while a lot of us film fans are looking forward to the upcoming Glass, there are still movies coming out to carry us along the way. One of those being The Upside, starring Bryan Cranston, Kevin Hart, and Nicole Kidman, about a wealthy quadriplegic who befriends a man he hires to help with his day-to-day physical operations.

I was personally looking forward to this movie, particularly for the three acting leads, and I was curious to see Kevin Hart in a semi-serious role. While this movie is definitely a comedy, it is also a drama and Hart is given opportunities to show acting abilities he doesn’t normally get the chance to. The concept was also intriguing, even though I didn’t know it was based on a true story and is a remake of a 2017 French film called The Intouchables. Overall I enjoyed this movie and, as my expectations weren’t too high, it is better than I thought it was going to be.

The best thing I can say about The Upside is that the star-studded lead cast lives up to their names and give entertaining scene-by-scene performances to carry the movie and make it enjoyable overall. Bryan Cranston is great in this movie but that’s to be expected. However, I will say that this movie, meaning the story, dialogue, and quality, doesn’t match how great Cranston actually is. He gives a 110% effort in every performance I’ve seen him in lately and does the same in The Upside. The only problem with that is, he’s almost too good for this movie.

The more surprising performance is Kevin Hart’s, in that he had a great balance of comedic and dramatic chops. I’m a fan of Kevin Hart and enjoy his performances in most things. I also never thought he was a one-trick-pony who only does his outrageous “Kevin Hart style” comedy.  I remember watching him in a movie like Soul Plane in 2004, before his career skyrocketed, where even though that movie was a comedy, his character was more down to Earth and serious at times. Therefore I figured he could do well in a dramatic role and while his role in The Upside is more of a mixture, I thought he did a good job of portraying his dramatic scenes, especially those with his son and ex-wife in the movie. Nicole Kidman was also great and did what she always does; blends into the environment of the movie and portrays her character so damn well that you forget it’s Nicole Kidman. Not that she was Oscar-worthy in this movie but I just think she’s so good that viewers don’t even realize it.

I mentioned Kevin Hart’s character Dell Scott and his relationship with his son and ex-wife; this story element is one of the best parts of the movie to me. I love the time they took to show what Scott was struggling through as a deadbeat father who has good intentions but keeps being brought down by the circumstances around him. Even though he wants to be a good father and support his son’s mother, he’s constantly turned away by them due to his past mistakes. This was very relatable for families dealing with similar circumstances and was handled quite well. I found myself engaged in this storyline every time it came on screen. 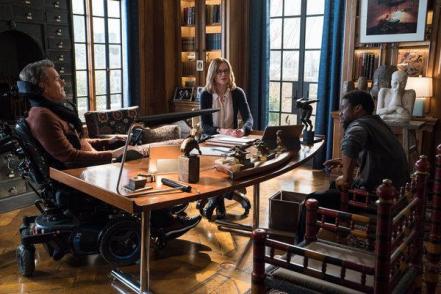 Without a doubt, Kevin Hart and Bryan Cranston have really good chemistry in this movie, something not easy to do with one actor only using his head, face, and mouth. Some of the best parts of the movie are when they leave the penthouse to explore New York. Seeing Hart’s character show Cranston around and having them engage in activities he wasn’t used to was fun and brought about great character moments.

I definitely didn’t love this movie, even though it was heartfelt and I enjoyed many things about it. There really aren’t too many negatives that I can point out; it’s just that there aren’t any elements of the plot or story that elevated it to be a really-good-to-great film. I will say, the second act, near the third act, dragged for a while and I found myself wondering where the story was going. Not that I was bored, but there definitely could’ve been a tighter focus on specific story elements such as Cranston’s search for a partner as a quadriplegic or Hart’s family storyline. There were also some unrealistic comedic moments that were solely there because Kevin Hart is in the movie. Some of them were even inconsistent with his character as they set him up to be a more serious guy, who’s definitely a smartass but not a typical Kevin Hart type character. When he does those Kevin Hart comedic beats, it didn’t necessarily work for this movie.

Ultimately, I like The Upside and think it’s a good film. It’s not for everyone, but those who liked the trailers and the talent involved will most likely enjoy it. It gets a thumbs up from me!