First ‘High Life’ Trailer Asks What It Means to Be Human

A24 has released the first trailer for High Life, acclaimed filmmaker Claire Denis’ new sci-fi thriller that is incredibly looked forward to inside the film world. Following the vanishing of the crew – death row inmates and a sinister doctor played by Juliette Binoche – Robert Pattinson and his baby daughter are the last survivors of a mission in deep space. A visionary film about love and intimacy, Pattinson and his daughter must rely on each other as their ship shoots toward 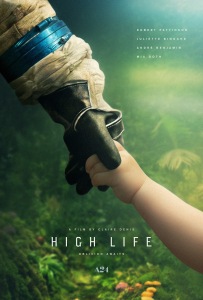 a black hole, all while the mysterious disappearance of the crew is unraveled.

Before we get to early reactions of the film at the Toronto International Film Festival last fall, the trailer is magnificent. It’s powerful and for the lack of a better word at the moment, just lovely. We rarely see trailers like this and I am not surprised that it’s an A24 film. What they do with film and the kind of film they go after to have under their name, it’s second to none in the business right now, in my honest opinion. I have no doubt that it will be as thought-provoking as anything over the last few years, but I can’t wait to see it.

As for those early reactions, more than most of the responses were positive. Denis is a filmmaker that is highly regarded by many of her peers, and that’s been the case for a long time. She strives for certain things in her films, and whether or not they are taken on by her viewers, there’s no doubt that she accomplished every story she sets out to tell. Many critics made it known that the film is extremely strange and delivers specific concepts in very graphic ways, something that may catch many viewers off guard. Hopefully that doesn’t hurt it as it draws closer. Whether it has a successful theatrical run or not, I hope everyone who sits down to watch it can watch it with open arms, rather than shaming it for what it is.

What did you think of the trailer? Did it intrigue you or are you trying to pick up the pieces? Also starring Andre Benjamin and Mia Goth, Denis’ High Life lands in theaters on April 12th.