While it may become overlooked in 2019 due to some massive tentpole names like Avengers, Star Wars and so many more, Dwayne Johnson wants all his fans and the die-hards of the Fast & Furious franchise to know that we will “f**king love” Hobbs & Shaw. The Rock is one of the best promoters on the planet, and for the most part he says his about every movie that he’s in. But for some different reason this time around, I believe him more than ever. He will

jump in front of a bullet for his character of Hobbs, and absolutely loves the rivalry that has been created between him and his co-star Jason Statham’s character Deckard Shaw. Their on-screen presence was the best part of the lackluster F. Gary Gray entry The Fate of the Furious, which will hopefully lead to an all-around awesome spinoff.

Entertainment Weekly has been hard at work over the past couple of weeks previewing all the major releases of 2019. With a full spread coming in their newest issue, a flurry of new images and details have been flowing out for multiple titles, with Hobbs & Shaw being one of them. First of all, the movie has been given a very unnecessary but fitting title for the franchise. Fast & Furious Presents: Hobbs & Shaw is the newly appointed title, which definitely seems like a studio move to make sure the movie is given the best opportunity to make as much money as possible. Having two studs like Johnson and Statham in the lead roles in plenty, but putting the Fast & Furious name in front of it ensures that this movie will crush at the box-office, as most of these movies do.

To start the conversation, Johnson has this to say about where the idea for the movie came from and what kind of movie to expect:

“When Furious 7 came along, it was after Furious 7 that we were going to do the spinoff, but then, of course, with the passing of Paul [Walker] and the incredible amount of heartache that that had caused not only his family but certainly the world and us, we felt like, let’s put that on hold and let’s put all of our focus and attention on Fast 8.”

“And it was in Fast 8, to get you an answer, it was finding it in Fast 8 that when Jason and I sat down early, before we started shooting, we thought, what if we had an opportunity here where we created two characters that were biting, yet would do it a winking way, that they actually enjoyed talking s**t to each other and in a really weird way enjoyed beating the sh‑‑ out of each other as well. [Laughs.] And then afterwards, hey, let’s sit down and have a drink. And we recognized very quickly that we had this cool and unique bond. I’ve known Jason for a very long time, and we felt like, hey, let’s give this a shot. Let’s lean into the chemistry and let’s lean into some comedy and see where it goes.”

“There’s going to be some big, ‘Oh, holy sh‑‑, I did not see that coming’ moments.” He continued: “Honor, a ride-or-die spirit, and above all else, family comes before anything. So I do think we delivered on that. Again, it was very, very important to us. Because this is now four Fast movies that I’ve done, so I understand the power of that, because it’s ingrained in my DNA.”

I love the comments, I do. While the franchise has always been and always will be Vin Diesel and Paul Walker’s, Johnson just gets it. Like he said, this will be his fourth movie in the franchise. He understands what it takes to make these movies and what it requires to satisfy fans. Going off of that, I truly hope that he, Statham and director David Leitch are able to bring back the grittiness to the franchise, a la Fast Five. I was turned off of the direction of these movies with

Fast 8, and just as I was recently swayed back onto course with the Transformers franchise and Bumblebee, I hope Hobbs & Shaw can do the same.

Another huge piece of this puzzle is Idris Elba, who will be playing the villain Brixton. Elba is a perfect choice as he not only does action extremely well, but can be quite menacing when he needs to, which is exactly what you need to have if you’re going to go up against Johnson and Statham together. Johnson also threw some comments out to EW about Elba’s character, even saying he’s “undefeated”:

“Our goal with Idris to make him the baddest villain the franchise has ever seen. Coming in, he is undefeated. And for a guy who is undefeated, three men enter and either one man leaves or two leave. And I say that respectfully because there have been so many bad guys who we’ve had over the years. But Idris is the perfect guy. Obviously, he’s a phenomenal actor, really brings a great weight and quality to the role — and a viability. He’s a big man and he’s a legitimate badass and a legitimate martial artist. I’ll tell you this, the past 10 days have been the finale; we’ve been shooting the big main event between us and Brixton. We’ve been fighting and it’s been pretty badass and painful, but great.”

If you weren’t looking forward to the movie before, it be very hard to continue to stay that after these comments. As just a pure action movie, this is one of the most anticipated movies of next year. For it to stand among the best in the franchise, it will need to create a good story and character development around the explosive action we expect to see. Hopefully an eventual first trailer starts this spinoff in the right gear. What do you think of these comments? Are you looking forward to it? Do you want Fast 9 instead? Also starring Vanessa Kirby and Eiza González, Leitch’s Fast & Furious Presents: Hobbs & Shaw will hit theaters on August 2nd, 2019. 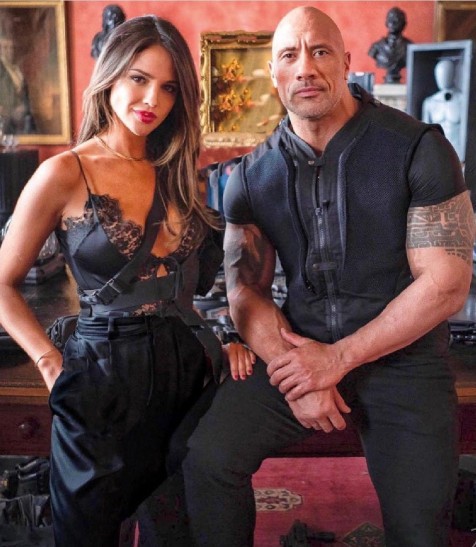