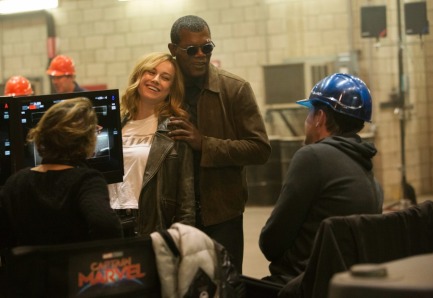 2019 is going to be a gigantic year for Marvel. Not only will the 11 years in the making Avengers: Endgame be hitting theaters in late April and Tom Holland’s Spider-Man be swinging again next summer, but Marvel’s first ever individually female-led superhero film in Captain Marvel will be making its way to us before both of them. To many, this film and hero have been waited on for years, but to others, it’s a very big mystery. Who is Carol Danvers? Why is everyone freaking out about her finally arriving? As the film draws closer, those questions will slowly begin to be answered. Luckily, we don’t have to wait until 2019 to have one of the most clouded mysteries solved.

When Jude Law was cast in the film all that time ago, fans everywhere raised their hands and swore by the fact that he would be playing the longtime favorite and pivotal character to this story, Captain Mar-Vell. It was too perfect, but little did everyone know, it was never actually announced or confirmed that he was. Time went on and nobody blinked an eye until just a few weeks ago, when Funko, the company behind the world famous bobblehead toys, released their official line for the movie, one of which that looked very similar to Jude Law’s character and was named after the popular Captain Marvel adversary Yon-Rogg. The internet and fandom went into a craze as everyone believed this is who Law could be, and for good reason. But once again, it was never officially announced or confirmed that that is who he was. Well folks, after over a year of pulling out our hair, we can all take a breathe of fresh air as the question has finally been answered.

Thanks to the official website for the movie, it was become officially confirmed that Jude Law is in fact playing Walter Lawson aka Captain Mar-Vell. Now, in the comics, Lawson is the gentlemen who grants Carols Danvers’ powers and sort of becomes her mentor while she learns to harness her powerful new abilities. As I mentioned earlier, he’s a crucial part of the story. I can’t continue without also mentioning that he could very well be a Skrull imitating Lawson or some other being who has taken on the name of Captain Mar-Vell just to be involved with Larson’s characters, as she is without any question the most powerful being in the universe (once she masters her power of course). That question will no doubt have to wait for the film, but for now, we at least know that the MCU prequel will feature Captain Mar-Vell, in whatever capacity it may be. 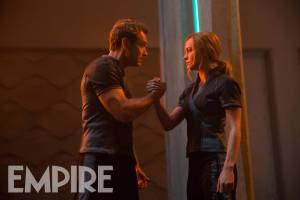 With an actor like Law in the role, one could hope that this character continues on. Whether he is actually the real Mar-Vell or a lookalike, seeing Law play opposite Larson would incredible, something that I have feeling Marvel Studios took into account when bringing him on board. But once again, only time will tell. While we wait for all these grueling questions to be answered, a trio of new images have been released across the web. One of them comes from Empire Magazine and their 2019 preview, whereas the other two are thanks to Fandango’s 2019 preview. Nothing mighty special revealed, rather just a couple of cool new shots to look at as we patiently wait for March to arrive.

What do you think readers? First off, do you think Jude Law is actually playing Mar-Vell? Is he a Skrull or some other lookalike? Have you enjoyed the trailers for the movie thus far? Do you have prior knowledge of the character or are you going in completely fresh? Let me know in the comment section below! Also starring Samuel L. Jackson, Ben Mendelsohn, Djimon Hounsou, Lee Pace, Lashana Lynch, Gemma Chan, Annette Bening and Clark Gregg, Anna Boden and Ryan Fleck’s Captain Marvel lands in theaters on March 8th, 2019.