Thanks to Sony Pictures, the first official trailer for their upcoming reboot of the Men in Black franchise is here. Men in Black International stars Chris Hemsworth and Tessa Thompson as the new protectors against other-worldly threats. But while they’re battling the scum from the universe, their biggest test yet has come in the form of a mole in the MIB organization. 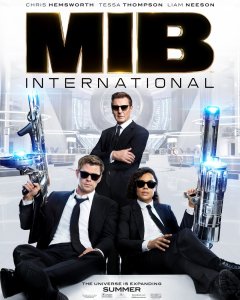 The first Men in Black movie is an absolute classic. Not only does it takes sci-fi to a really cool and modern (for its time) direction, but it pairs two very unlikely gentlemen in Tommy Lee Jones and Will Smith. I was too you at the time, but I could imagine the question of having these two guys lead the franchise in this particular movie. If that was the case, boy was everyone wrong. It’s success led to a sequel and an eventual third movie as well, but after the lackluster performance of number three, as happens these days in film, a reboot was put in the works. Few moves here, few moves and we now have our first trailer for the new iteration of these alien fighting badasses.

This movie is one of those that no matter what I think of the trailers, I will go to see. It’s not because of my excitement or even because of my past experience with the franchise, but simply because of the names involved. Chris Hemsworth is easily one of the best male actors going right now and Tessa Thompson, she’s a powerhouse. But it’s their on screen chemistry from Thor: Ragnarok that gets me excited for this one, and the trailer shows that it’ll definitely continue as they switch from Asgardian weaponry to slick suits and shades.

With F. Gary Gray in the director’s chair, who in my opinion had one knockout in Straight Outta Compton and one kiss in The Fate of the Furious, it promises a different kind of Men in Black movie, one that a lot more people can get behind. The biggest draw will be just how fun it looks. If Sony is able to keep the trend of pushing out footage like this trailer, they could see this movie do very well when summer rolls around next year. Let’s just hope it has some good storytelling to it as well.

What do you think of the trailer? If not interested before, did it having you nodding your head in a good one? Do you like the pairing of Hemsworth and Thompson? Also starring Rebecca Ferguson, Emma Thompson and Liam Neeson, Gray’s Men in Black International will be released on June 14th, 2019.