The first official image for Warner Bros.’ Upcoming crime drama The Kitchen has been released. The film is directed by Andrew Berloff and stars Melissa McCarthy, Elisabeth Moss and Tiffany Haddish as three housewives of a trio of 1970s Hell’s Kitchen gangsters. But when those gangsters get locked up in prison, the housewives decide to run their husband’s criminal enterprise.

This is a very interesting project. Originally, because of the cast, I immediately thought it was a comedy. It just fits that mold. But, once I did my research, I came to find out that the film is being described as an action crime drama. Now I’m sure it will have comedy beats, especially with two powerhouses in McCarthy and Haddish in leading roles, but never did it come to mind that it could be an “action crime drama.” There’s also something to be said about it sounding almost identical to this year’s Widows. For those who saw Steve McQueen’s film, it may impact their thoughts towards this one. Luckily for WB, barely anyone went out to see Widows. It had nothing to do with the film as it currently is 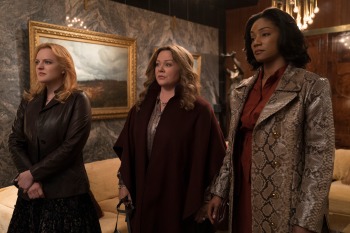 sitting at somewhere around a 90% on Rotten Tomatoes, leaving the only answer as to why it didn’t make more being pre-release marketing. If WB wants this to be a solid hit, they need to hit the ground running and learn from the mistakes that Widows may have had before it hit theaters.

You may think what you want about Melissa McCarthy’s comedy, but her drama performances are outstanding, possibly even being nominated for an Oscar this year. Elisabeth Moss is even better, as she’s been leading the critically-acclaimed show The Handmaid’s Tale for the last few years. Most will recognize her from a Mad Men. Tiffany Haddish is the wild card. I personally haven’t seen her do anything outside of comedy, so I’m not sure what to expect. With two world class talents around her, it’s hard to see her performance being a downer. The supporting cast is just as strong as well, with names like Domhnall Gleeson, Common and James Badge Dale being included. While I never heard of it or was particularly interested in it beforehand, I am suddenly craving to see what it looks like through a trailer. Hopefully we see one soon.

What do you think of The Kitchen? Do you like the cast? How does the description impact your thought of it? Are you looking forward to seeing these three ladies act alongside each other? Leave all your questions, comments and concerns in the field below! Also starring Brian D’Arcy James, Margo Martindale and Bill Camp, Berloff’s film will be released on September 20th, 2019.