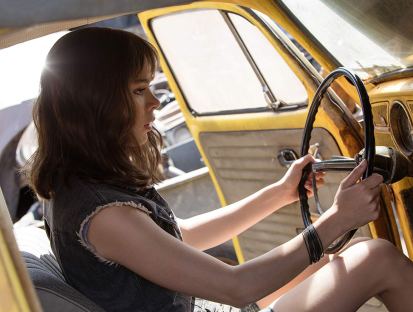 Paramount Pictures has released a pair of character featurettes for their final big time movie of the year, Bumblebee. While it was mildly talked about all the way up until about two weeks ago, the excitement for the first Transformers spinoff has quickly risen to a pretty surprising level. The studio has early reviews to thank for that, as I’ve seen the majority of film reviewers that I follow come out and claim that it’s the best of the franchise and the Transformers movie we deserved over ten years ago. Those are some pretty big statements, but on my end they’re validated thanks to a couple of trailers that made sure we knew this wasn’t going to be the kind of Transformers movie we’ve come to know over the last decade.

A big part of this spinoff separating itself from past Transformers is the human side of it. While the series has featured some pretty great names throughout its run, none of those roles were written good at all or even given a chance to be a character we could relate to. Shia LaBeouf’s Sam Witwicki was the closest thing we had during the first trilogy, but his “downward spiral” and clear want to leave the franchise had us not interested in that character as much as we wanted to be. That’s where Bumblebee changes the game, as it seems like director Travis Knight has created a few very involved and likable characters, which are led by Hailee Steinfeld’s teenager and John Cena’s government agent.

While we know some, not all has been revealed about their characters in the lead up to the film. Thankfully, Paramount wants to give everyone a bit more insight into the characters we’ll be journeying along with next week. The featurettes from below do a good job of revealing just enough to get us excited to see these characters interact with Bee and the other Transformers the movie will feature. Now that Michael Bay is out of the franchise, hopefully that’s a good indication that well-rounded directors like Knight will shift the franchise into a series that includes fleshed our characters with tons of depth.

Check out the pair of bts videos below. After doing so, make sure to leave all your questions, comments and concerns in the section below! Also starring Jorge Lendeborg Jr., John Ortiz, Angela Bassett, Justin Theroux and Dylan O’Brien as Bumblebee, Bumblebee is released in theaters on December 21st.