With full steam ahead at Warner Bros. on the Birds of Prey (And the Fantabulous Emancipation of One Harley Quinn) movie, Warner Bros. has decided that it is going to release the full casting roster for the movie as well as reveal another potential villain for the film to star along Ewan McGregor’s Black Mask villain. While we haven’t gotten the 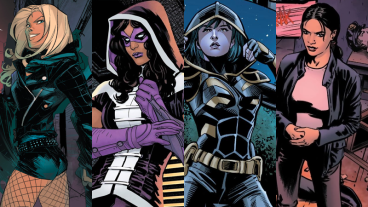 official synopsis for the movie, it has been rumored that the story will revolve around Harley Quinn’s break up from the Joker, as Harley Quinn teams up with Black Canary, Huntress and Detective Renee Montoya as they come together to save the life of a little girl (Cassandra Cain) from the evil crime lord Black Mask.

If that is the plot of the movie it sounds pretty decent. It would also be a cool little nod to Cassandra Cain, who we know becomes Batgirl. The only thing that makes this plot a little skeptical is because we have heard rumors that Ben Affleck and Henry Cavill are out as Batman and Superman and that Supergirl and Batgirl have been targets of Warner Bros. to establish in the universe, so saving a young Cassandra Cain could muddy things for one of those projects.

As far as the full cast though, we know that Margot Robbie is returning to play Harley Quinn. Joining her is Mary Elizabeth Winstead who will be playing Helena Bertinelli / Huntress, Jurnee Smollett-Bell as Dinah Lance / Black Canary and Rosie Perez as Detective Renee Montoya. We also already know from a previous announcement that Ewan McGregor will play the main villain of the movie crime lord Roman Sionis aka Black Mask. The new actors joining the cast however were announced today officially by Warner Bros. and also gives us a new villain to add to the cast. It was announced that Chris Messina has been cast as the villainous Victor Zsasz. Messina is known for his role in the TV show The Mindy Project. Those of you unfamilair with Victor Zsasz, he is a serial killer that murders his target or victims and after makes a mark on his skin by cutting it leaving a scar to represent the life he has taken. He is also known to be a complete nut job usually. You can probably expect him to be hired by Black Mask in the movie.

In addition to announcing Messina as a part of the film, Warner Bros. announced that actors Steven Williams (The Chi), Derek Wilson, Dana Lee (Dr. Ken), Francois Chau (The Expanse, The Tick), and Matthew Willig (The Ballad of Buster Scruggs) have all been cast in the movie. The only information that was provided for these characters is that Derek Wilson’s character may be working with Rosie Perez’s Renee Montoya in some capacity. While not official, there have been rumors circulating that Warner Bros. is looking to cast Ella Jay Basco as the role of Cassandra Cain. No word on whether or not she will be playing the role.

So what do you think movie fans? Are you excited for the ever growing cast of Birds of Prey (And the Fantabulous Emancipation of One Harley Quinn)? What about adding Victor Zsasz as a villain to the movie? Let us know what you think in the comments below!