We have known for a while now that Disney is planning on diving into the world of the Marvel Cinematic Universe through their upcoming streaming service Disney+. By doing this, the plan was to visit certain characters in the Marvel Cinematic Universe that are popular among fans, but haven’t been able to really have their own movie or individual time to shine. The characters we currently know that are getting their own series are Loki, Falcon and the Winter Soldier, and Scarlet Witch. Many speculations about when the these stories will take place have been going around, but for Scarlet Witch, we have gotten a little more information than the others.

According to reports, the series will in fact take place during the time period that Wanda Maximoff aka Scarlet Witch, has gotten her powers, putting the rumors that it may be an origin story to rest. The second and most exciting thing is that it seems it has been confirmed that Paul Bettany will indeed be reprising his role as Vision in the series. With 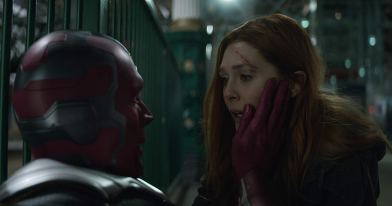 this information it may be safe to assume that the movie takes place before the events of Avengers: Infinity War. While it isn’t 100% that it take place before the movie, it’s hard to imagine that they would take the story after the events of Avengers: Infinity War. Best bets are that the story takes place between the events going on right before or during Captain America: Civil War or after Civil War when Wanda is a fugitive due to the Sokovia Accords.

Another interesting thing we have learned is the title of the series. Apparently not only will Vision be in the show, his name will appear in the title. The title for the series will reportedly be  Vision and the Scarlet Witch. With this title it further more pushes the idea that the story may revolve around their relationship together, especially if Vision’s name is before Scarlet Witch’s in the title. Again we don’t have any real concrete information about the show other than this. So until then you can continue to speculate about the show.

So what do you think? Are you excited for Vision and the Scarlet Witch? When do you think it’ll take place in the Marvel Cinematic Universe? Let us know what you think in the comments below!