While we haven’t seen any footage for the upcoming reboot of the Hellboy franchise from Lionsgate and director Neil Marshall, it has quickly become of the 2019s most anticipated comic book movies. Plain and simple, they seem to be going back to its original roots that has made the character so popular over the years by being accepting of its more horror-like background. Empire Magazine has released a brand new image for a film, which has come with some very intriguing comments from Marshall himself. 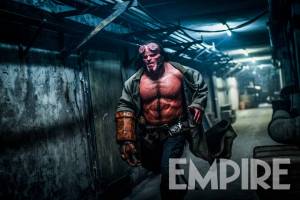 For starters, this new image is pretty cool. Sure, it’s just Hellboy running through a gritty hallway either away or towards something, but just as was with Guillermo Del Toro and Ron Perlman’s Hellboy, the realistic look of this character is second to none. David Harbour truly fits the role of this guy and the department responsible for bringing him to life in devil-red deserves a huge round of applause. I cannot wait to see what kind of action Marshall is going to put Harbour through in this movie.

Secondly, and most importantly, it sure as hell sounds like everyone knows what this movie is and should be. Thanks to Empire, Marshall said the following about the approach they had towards the reboot:

“It was always a case of, ‘When in doubt, go back to the source material. More violent and more bloody. We weren’t making it with handcuffs on.”

I’ve been looking forward to this movie for a while now, but these comments have really turned it up a notch. I would have no doubt LOVED to have seen an R-rated Hellboy with del Toro and Perlman, but the comic book landscape was completely different then. It was impossible from multiple standpoints. Now, it’s a cake walk. No one second guesses an R-rated Hellboy movie, nor should they. It is exactly what the character should be and not only does Marshall know that, but from his comments, Lionsgate knows that as well. The reason we never received a third movie from del Toro was because it never made enough money at a PG-13 rating, the expectations were too high. Now, with this team and approach, Lionsgate understands the audience it’s directed at, which could result in a much bigger outcome when it’s all said an done.

What do you think of the image? How about Marshall’s comments? Do his words get you excited for what kind of adaptation the reboot will be? Also starting Ian McShane, Daniel Dae Kim, Sasha Lane and Milla Jovovich as the Blood Queen, Marshall’s Hellboy is set to be released on April 12th, 2019.