Warner Bros. has released a brand new featurette for their upcoming DC blockbuster Aquaman. Directed by The Conjuring and Furious 7 director James Wan, this is the first live-action standalone adventure from Arthur Curry we’ve seen. While Jason Momoa’s turn as the Atlantean was easily the most exciting aspect of Justice League, he was incredibly underused in that film. Luckily, plans for a solo movie we’re already set in stone when it came time for the DCEU to basically implode. While we wait to see how this universe will move forward (if it will at all), Aquaman looks to re-engage fans and everyday audiences alike with its completely different take on DC character who has been considered a joke for a very long time. 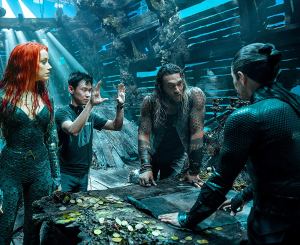 A joke I say? Don’t get me wrong, I’m not calling him a joke. In fact, Arthur Curry is one of two-favorite characters in the DC line-up. I have history with this guy, and while I questioned the decision to have Momoa play him strictly because of his look, I’m also insanely intrigued and excited to finally see this character get a chance on the big screen, which is long overdue in my opinion. Sadly, not everyone thinks like me. Aquaman has long been known as the laugh of the league, with him “talking” to fish and all. But if you dare say that now that Momoa is in the role and a filmmaker like Wan directing, oh boy how wrong you are.

It’s no secret that I’ve questioned the DCEU. I’ve questioned the moves and style of movies they’ve gone for. I’ve questioned it because of how much I want these movie to succeed. If you’ve seen our trailer reactions, you know that I flipped the script for myself in between the two trailers. I’m now raging to see this movie. Sure, I still have my hesitancies because of how Warner Bros. and DC, not the filmmakers, but the studio’s have handled these properties, but everything laid out in front of me lately has shown me that I can be excited and anticipating the story that will be hitting theaters in a months time.

As with every movie, after I see two trailers, I don’t click play anymore. I’ve seen what I need to see at that point, and if a film hasn’t won me over in over four minutes of footage, then it won’t at all until I see the actual movie. But there’s always one thing that will make me break that rule every once in a while, a featurette. I would 1000% rather watch a behind-the-scenes featurette than a trailer. I don’t know what it is, but these bts shots of how the film is being made interests me way more than edited footage. Of course, I love finished footage, but for me, there is truly nothing like a behind-the-camera process.

On top of this brand new featurette, which is truly fantastic, the final official posters for the movie have been released. Keeping it somewhat simple, these posters showcase Momoa’s Curry in his classic orange and green Aquaman duds, with the other poster including Amber Heard’s Mera (a personal favorite character of mine in all of DC comics) and future Queen of Atlantis alongside her future hubby. Check out both he featurette and posters below, and please make sure to leave your thoughts in the comments! Wan’s Aquaman swims its way into theaters on December 21st.