For the second day in a row, Disney/Pixar has released another teaser trailer for Toy Story 4 along with more official posters that are like the original Woody poster that dropped with the very first teaser trailer. This time the teaser poster focuses on two new characters along with an appearance from Woody and Buzz. Oddly enough, the characters acknowledge that the Toy Story characters have been apart of movies, essentially breaking the fourth wall that we have seen movies like Deadpool do. The clip below is the teaser trailer that was released.

With the new teaser trailer we are introduced to two new characters that will be appearing in Toy Story 4. Both characters are stuffed animals, the first being a Duck named Ducky and the other is a rabbit named Bunny. The voices behind the characters are that of comedy duo Key and Peele. Ducky is voiced by Keegan-Michael Key, while Bunny is voiced by Jordan Peele. In the clip we meet the two characters at a carnival and can deduct that they are carnival toys. (Also look closely and you can see the guitar used in Coco in the background). The characters talk about their reaction to the Toy Story movies and how they thought Toy Story 3 was the last installment of the franchise, but now they are aware of the new movie Toy Story 4. Then they begin pretending to be Buzz Lightyear and repeating his famous catchphrase “To Infinity and Beyond” only incorrectly. That’s when Woody and Buzz step in to correct them, only for the Ducky and Bunny to not believe them.

While this may just seem like a funny little clip, Pixar has released a statement saying that these characters as well as the carnival will play a part in Toy Story 4. The statement saying,

“Woody’s journey in Toy Story 4 includes a visit to a carnival where he meets Ducky and Bunny, two carnival prizes who are eager to be won. But when their plans are rudely interrupted by Woody and his friends, they find themselves on an unexpected adventure with a group of toys who have no idea what it feels like to be tacked to a prize wall.”

Again we see a familiar theme that keeps presenting itself that these new toys, along with Forky, the new character from the first trailer, are going to be struggling with what happens when you feel you are made for one certain task, only for an event to change everything. 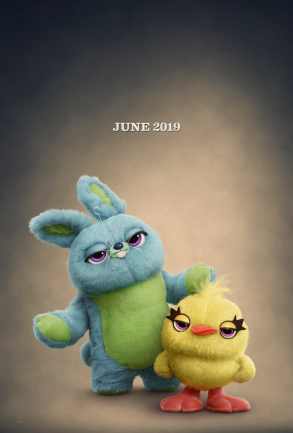 Finally Pixar has released more official character posters like the Woody character poster that was released the day the first official teaser trailer was dropped. This time we get Buzz Lightyear looking off into the distance with the same background that Woody’s character poster had. The second features the characters we just met Bunny and Ducky, posing for the camera. Lastly we have our other newest character Forky. Forky is a creation by Bonnie, who is now going through an identity crisis as he feels his purpose of being a utensil was taken away by Bonnie, who turned him into a “toy”. It also seems like in the picture he is struggling with his identity of being a “spork” and whether or not he is a fork or a spoon.

So what do you guys think? Are you excited with two days in a row of getting Toy Story 4 teaser trailers and posters? Is Pixar showing to much too soon? Let us know what you think in the comments below!