Netflix has released a brand new trailer for their upcoming Andy Serkis film Mowgli, which is Serkis’ take on The Jungle Book that will be more in-line with the original book rather than the film story we know and love. The now titled Mowgli: Legend of the Jungle has gone through quite a bit over the last few years. Not only was production pushed back to give Serkis more time, but Warner Bros. sold the movie to Netflix a few 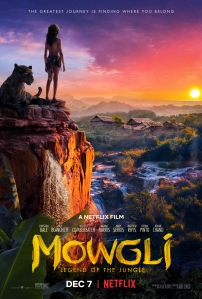 months back, which resulted in another push back to 2019. We all wondered just how bad the movie could’ve possibly been if that was the case, but that might’ve not been the case at all. Not only does the new trailer offer a great new look at the film, but it drops a bomb of a release in just a few weeks!

Not only will the film be released on Netflix the first weekend of December, possibly squashing any worries anyone had about the film, but Netflix has enough confidence in the project that they are giving it a very slim theater release in a few weeks as well. Now for us who would love to see it on a big screen, that unfortunately means driving to markets such as New York, Los Angeles, San Francisco and London on November 29th. But if you’re lucky, there will be an expansion of its theater release the following week when it hits Netflix, possibly giving you the chance to see it on the big screen.

It’s quite interesting as to why Netflix is doing this. Is it just confidence in the movie or could it be up for some kind of award consideration, such as visual effects. After all, Serkis originally directed the film for WB with what was described as “cutting-edge motion-capture effects for the animals.” With that being the case, hopefully my location will bring the movie into theaters, giving me a chance to see what these effects are really all about.

For now, check out the new trailer below, but also don’t forget to leave your thoughts on everything from above in the comments section. What do you think of the movie? Do you want to see it in theaters? Are you looking forward to it? Andy Serkis’ Mowgli stars Christian Bale, Cate Blanchett, Benedict Cumberbatch, Naomie Harris, Andy Serkis, Matthew Rhys, Freida Pinto, Peter Mullan, Jack Reynor, Eddie Marsan, Tom Hollander, Rohan Chand and will now be released on Netflix on December 7th.