November is just a day away, and while the entire month is jam-packed with films every week, there’s one that stands above the rest: Creed II. The sequel to the absolutely magnificent first Creed movie has been as anticipated as any other film this year, but once its first trailer dropped, it reached an all-time high. Now that the movie is just a matter of weeks away, we’re beginning to see bits and pieces of new 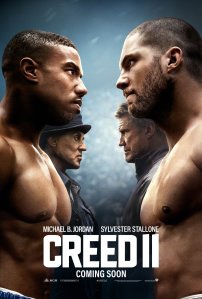 things for the film, starting with another brilliant poster and pair of TV spots from below.

If there’s once thing that has stood out from the sequel other than its trailer, it’s its poster game. Each and every poster that has been released has had meaning and powerful look behind it. My personal favorite is still the one just including Adonis on the ring floor roaring as loud as it can, but this newly released one-sheet is a damn good second place. It’s still a pretty simple poster in the means of design, but why does it need to be fancy? This film will be getting butt loads of people in seats because of one reason: Balboa/Creed vs Drago. It’s the main even for a reason, and this new poster does a beautiful job of displaying that. I didn’t think I could get any more excited, but every time I look at this image, I get hyped for the potential this film has.

On the flip side, MGM has released two new TV spots for the movie. Fair warning, I haven’t watched them because I just don’t want to see anymore footage for it. I’ve seen what I need to, and that’s it. So if you decide to watch them, can’t blame me for any footage you may have not wanted to see. With such a short time period until we see the movie, I don’t expect to see another trailer, which is why we’re already seeing TV spots. While I don’t believe this film needs any kind of press, we will no doubt be seeing a handful of spots here and there to attract the public eye even more. If you were excited for Creed II before this post, I have a good feeling you are now.

After checking out the poster and new footage, leave all your thoughts in the comments below! What do you think of the poster? How pumped are you for Balboa/Creed vs Drago? And the footage? Do you like what you’ve seen just as much as I have? Starring Michael B. Jordan, Sylvester Stallone, Tessa Thompson, Wood Harris, Russell Hornsby, Florian “Big Nasty” Munteanu, Andre Ward, Phylicia Rashad and Dolph Lundgren, Steven Caple Jr.’s Creed II hits theaters on November 21st.