We all know that Disney is basically remaking all their classic movies. So one would imagine that Pinocchio would be one of those movies that would be remade. While it hasn’t been officially announced that Disney is tackling a live action Pinocchio movie, Guillermo Del Toro has decided that he wants to take on the classic tale and turn the the fable into a vision his own. The movie itself will have 0 ties to Disney and their live action remakes which is great for del Toro. That way he can do whatever wild imaginative ideas he wants to do. 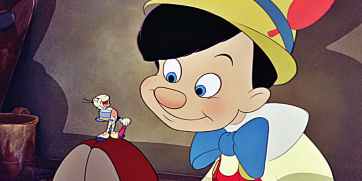 del Toro has an army of producers attached such as Lisa Henson, Alex Bulkley, Corey Campodonico, and Gary Ungar. When it comes to writing the script for the movie, del Toro will partner with Patrick McHale who has written for Over The Garden Wall and Adventure Time. Del Toro will not be alone in the directors chair, as Fantastic Mr. Fox director Mark Gustafson will co direct alongside del Toro.

Guillermo del Toro has made it very clear that he has wanted to direct a Pinocchio movie for quite a long time. He has stated before that this is more than just a movie to him. He was quoted saying:

“No art form has influenced my life and my work more than animation and no single character in history has had as deep of a personal connection to me as Pinocchio. In our story, Pinocchio is an innocent soul with an uncaring father who gets lost in a world he cannot comprehend. He embarks on an extraordinary journey that leaves him with a deep understanding of his father and the real world. I’ve wanted to make this movie for as long as I can remember. After the incredible experience we have had on Trollhunters, I am grateful that the talented team at Netflix is giving me the opportunity of a lifetime to introduce audiences everywhere to my version of this strange puppet-turned-real-boy.”

With what del Toro said in the quote above. We can assume that the movie itself will definitely have a del Toro type edge and feel to the movie and will be steering away from the classic Disney tale that we know. We all know the types of wild stories del Toro can come up with especially most recently The Shape of Water and the acclaim that that movie brought so expect that type of edge to be brought to the movie.

He has said in the past  how much of a desire he has to create this project, even giving us an idea of what he wants to do with the story. His idea for the story revolves around Pinocchio in and the Carlo Collodi novel, except this time it will be set in the time of fascist Italy during WWII and the rise of Mussolini. The novel itself was created before WWII in the 1880’s, but del Toro has taken the spin of Pinocchio being a puppet to the real people and compared it to how people were puppets to the Fascist regime. Chilling right! The story of Pinocchio is one that is a dark tale so don’t expect del Toro to hold anything back.

So what do you think about Guillermo del Toro taking on Pinocchio? Are you ready for a dark del Toro style telling of the classic story? Let us know what you think in the comments below!