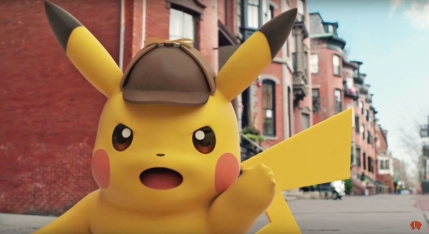 Pokemon fans rejoice! We have finally learned officially what the Detective Pikachu movie will be about as the official synopsis for the movie has been released, giving us a clue about what the movie is going to be about. Before today, what we have heard so far is that the movie will revolve around the title character, Detective Pikachu, who will be voiced by non other than Ryan Reynolds, and the Pikachu will be some sort of Sherlock Holmes of the pokemon world. Other than that we didn’t really know much and hadn’t seen anything until August when the Title Banner was released. But now thanks to the folks at Super Bros. Movies, we now know the plot of the movie.

The movie synopsis is as follows:

“The story begins when ace private eye Harry Goodman goes mysteriously missing, prompting his 21-year-old son Tim to find out what happened. Aiding in the investigation is Harry’s former Pokémon partner, Detective Pikachu: a hilariously wise-cracking, adorable super-sleuth who is a puzzlement even to himself. Finding that they are uniquely equipped to communicate with one another, Tim and Pikachu become reluctant partners on a thrilling adventure to unravel the tangled mystery. Chasing clues together through the neon-lit streets of Ryme City—a sprawling, modern metropolis where humans and Pokémon live in partnership in a hyper-realistic live-action world—they encounter a diverse cast of Pokémon characters and uncover a shocking plot that could destroy this peaceful co-existence and threaten the whole Pokémon universe.”

From what we have heard about the movie and the goal of Legendary Entertainment who is producing the movie, is that they are aiming to have a very realistic take on the the world of Pokemon. The goal for the studio is for the world of Pokemon to work in a way that Rocket Raccoon from Marvel’s Guardian’s of the Galaxy works in the Marvel movies. He is interacting with human characters and other CGI characters alike leaving the audience feeling like they are a normal part of the world.

With the synopsis released and with the cast previously released, we can possibly start placing who will be playing what character. While I told you Ryan Reynolds will be playing Detective Pikachu, the role of Harry Goodman has’t been announced and maybe not even cast yet. Who has been cast is the role of Tim Goodman, Harry’s son who will be played by Justice Smith. If the name sounds familiar it is because he played Franklin Webb in this summers Jurassic World: Fallen Kingdom.

Other cast members have been announced with the name of the character they will be playing, we don’t know much more than that. Kathryn Newton who played Angela in 2017’s Three Billboards Outside of Ebbing, Missouri will play a character named Lucy. Ken Wantanabe known for his roles in many Japanese action movie roles as well as his role as Dr. Ishiro Serizawa in 2014’s Godzilla will be playing another detective named Detective Yoshida. Finally, the last role cast is none other than our favorite Deadpool taxi driver Dopinder, played by Karan Soni. He will be playing a character named Jack.

While I definitely wasn’t thrilled when it was announced our first live action Pokemon movie wasn’t going to follow a trainer trying to “be the very best”, I definitely am more intrigued now that I have a synopsis and it actually doesn’t sound to bad. While the movie comes out next year, I am definitely going to be apprehensive until I see a trailer.

So what do you guys think? Now that you have a synopsis, do you want to see Detective Pikachu?  Or are you going to pass on the movie? Let us know what you think in the comments below!