Sony Pictures has released the first official trailer for The Possession of Hannah Grace. After a possession goes completely wrong, Megan Reed (Shay Mitchell), who works the graveyard shift at a morgue, takes the delivery of the disfigured body. Locked alone inside the building alone with nothing but lifeless cadaver’s, Megan begins to experience terrifying visions and suspects that the body may be 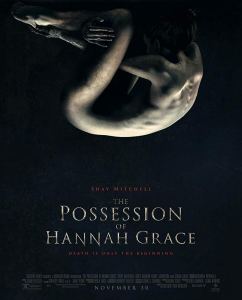 possessed by a demonic force.

It’s that time of year where we’ll begin to see more and more horror films thrown on the plate. Usually they aren’t all that good, but I’ll be quite honest, I’m kind of interested in seeing what happens with this movie. Will it be good? Probably not, but the plot and using the backdrop of a creepy as hell morgue is the perfect setting for this type of movie. But what gets me most about this one is two members of the cast.

Shay Mitchell has been well known in the business for a while, but her time of Pretty Little Liars seemed to have stopped her from venturing into film. Now, this isn’t the biggest movie coming out, but it could show the kind of talent she has on screen. From what I’ve seen in just a few moments, she’s pretty damn good. On the flip side, there’s another TV actress I hope to see more and more in the future. I was an avid follower of Castle, and while Nathan Fillion was a big part of that, Stana Katic was as well. I love her prowess on screen and have felt a slight void in my life since Castle as cancelled a few years ago. Now whether or not her role is huge, I hope this is just a precursor to seeing her in more and more movies down the road.

What do you think of the trailer? Does it look like it’ll scare the crap out of you or just pass by? Also starring Grey Damon and Kirby Johnson, The Possession of Hannah Grace will be released in theaters on November 30th.

A shocking exorcism spirals out of control, claiming the life of a young woman. Months later, Megan Reed (Shay Mitchell) is working the graveyard shift in the morgue when she takes delivery of a disfigured cadaver. Locked alone inside the basement corridors, Megan begins to experience horrifying visions and starts to suspect that the body may be possessed by a ruthless demonic force.