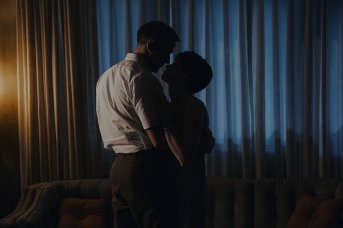 First Man has been making the rounds at film festivals and press screenings across the country, and so far, the early word of mouth on Damien Chazelle’s latest film is that it’s as great as we expected and as it should be. The hype on the film has been an all-time high not just for the average movie-going audience, but for me personally as well. I’ve been following and over-the-moon excited for it since the day it was announced two years ago. And now that it’s just over a week away, I’m ready to embark on this intense journey with Apollo 11.

Everything that I’ve seen from the film so far has led me to believe that this will be one of the most exhilarating experiences of the year. Although we know the outcome of this story, Director Damien Chazelle has put an interesting spin on this film and having a lot of the personal life of Neil Armstrong (Ryan Gosling) mended in the story. We know what happens with Armstrong and company once they lift-off, but what about everything that took place prior? The training, the family dynamics, the press events. Those are the moments that have excited me the most from trailers.

Another huge aspect of this film is Claire Foy. Her role as Janet Armstrong will be crucial. Foy is known for her award-winning performance on The Crown, but 2018 has seen her shift over to film format with roles in First Man, Unsane and The Girl In the Spider’s Web. Her talent is beginning to be recognized by filmmakers, and she’s now given a huge opportunity to let everyone know who she is opposite Gosling and in a Damien Chazelle movie. It’s going to be fascinating. Don’t believe me? One of the following clips teases her role in the story and what kind of acting chops she’ll be putting on display. As I said, it’s going to be fascinating.

Check out the newly released clips below and please make sure to leave your thoughts in the comments section! Are you as excited as I am? What aspect are you more interested in? The space exploration or ground element? Also starting Jason Clarke, Kyle Chandler, Ciaran Hinds, Shea Whigham, Corey Stoll, and Pablo Schreiber, Chazelle’s First Man lands in theaters on October 12th.