Epic New ‘Spider-Man: Into the Spider-Verse’ Trailer Releases All the Web-Slingers

Sony has unleashed a brand new trailer for their upcoming animated adventure Spider-Man: Into the Spider-Verse. The film is set to follow Miles Morales (Shameik Moore), who has now taken on the mantle of of Spider-Man. On top of trying to master his new found powers, Miles will be discovering the multi-verse of web-slingers, which includes Jake Johnson’s Peter Parker and as this trailer reveals, a few major surprises. 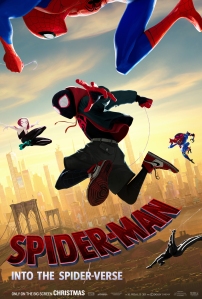 This movie looks awesome! I’ll be honest, I was not on board with the idea of this movie not just when it was first announced, but after its teaser as well. I was still in question, but following these last two trailers, I’ve quietly and increasingly become very excited with the project. The animation style is the pop of it all, as it’s completely unique compared to anything else being released, which will no doubt get tons of people to the theater because of its standout appeal.

But the biggest draw of this film is the idea of introducing the entire spider-verse. Hardcore Spider-Man fans know how large the world of web-slingers is. It’s something so big that it will never see the light of day in live-action, it’s just too heavy. But animation? It’s absolutely perfect. It’s no surprise that the idea of this movie came from the wild minds of Phil Lord and Chris Miller. Whether or not this is being planned as an entire franchise or just a single adventure, it’s without a doubt a brilliant idea to use the entire multi-verse of spider-people to tell a Spider-Man story. We’re already on our third live-action incarnation of the character, and while Tom Holland’s version is the best used thus far, how can it be different? They’ve figured it out.

What do you think of the trailer? How interested are you in the movie? If you’re a diehard fan, how excited are you to see a story like this be told? Also starring the voices of Mahershala Ali, Brian Tyree Henry, Luna Lauren-Valez, Hailee Steinfeld as Spider-Gwen, Lily Tomlin as Aunt May, John Mulaney as Spider-Ham, Nicolas Cage as Spider-Man Noir and Liev Schreiber as the villain Kingpin, the movie is directed by Peter Ramsey (Rise of the Guardians), Bob Perschietti and Rodney Rothman and will be released this Christmas on December 14th.