It seems like it was just yesterday, but Dwayne Johnson’s Big Trouble In Little China was announced back in 2015. Then, when Johnson was announced to produce and star, it was thought that this incarnation of the film would be a remake, which instantly made many fans of the original movie a little worried as to what they were going to come up with. Since then, we haven’t seen or heard anything

about it, which makes complete sense since Johnson is the busiest guy on the planet. Yesterday brought our first real concrete news in three years, and it changed our outlook on the movie completely.

Thanks to Collider and Adam Chitwood, who recently sat down with the President of Production of Seven Bucks Productions, Hiram Garcia, Chitwood was able to get a definitive answer from the exec as to where this new incarnation of John Carpenter’s story will land, and it may surprise you:

“There’s a lot of things going on with [Big Trouble in Little China]. We are in the process of developing that, and let me tell you, the idea is not to actually remake Big Trouble in Little China. You can’t remake a classic like that, so what we’re planning to do is we’re going to continue the story. We’re going to continue the universe of Big Trouble in Little China. Everything that happened in the original exists and is standalone and I think there’s only one person that could ever play Jack Burton, so Dwayne would never try and play that character. So we are just having a lot of fun. We’re actually in a really great space with the story that we’ve cracked. But yeah, no remake. It is a continuation, and we are deep into development on that as well, and I think you’ll start hearing some things about that probably soon.”

This is big, and a quite incredible development. From those who absolute adore the Carpenter and Kurt Russell version, there’s no replacing Russell as Jack Burton, and as Garcia explains, they’re taking this story in a different direction and not relying on Johnson to recreate the magic that Russell brought to the film. And the key to Garcia’s comments is that he says “continue the story” rather than ever mentioning the word sequel. How connected will it be to the original? Have we seen Johnson’s character before or is he someone completely new?

There’s some awesome new questions that have come to the surface, and everything that has happened recently has gotten me that much more excited for the new story. I love the original movie, and while I don’t really think this new movie will be able to capture the essence of that movie, I’m open to the idea of seeing what they’re going to give to us. Big Trouble In Little China currently has no director or release date. 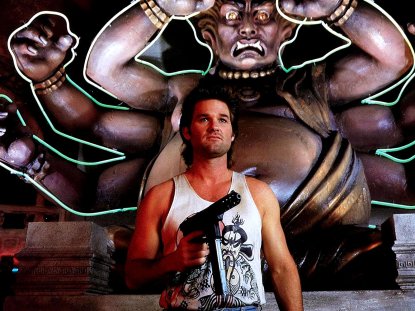