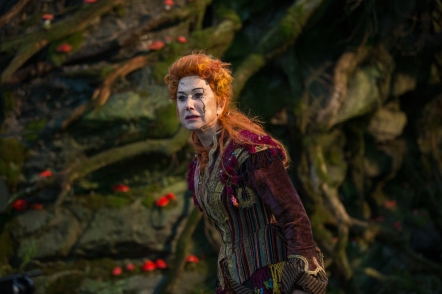 Disney has revealed a brand new look at their upcoming holiday film The Nutcracker and the Four Realms. Directed by Lasse Hallström and Joe Johnston, this modern day telling gives the beloved 19th century ballet classic that Disney magic that we’ve come to appreciate over the last few decades. Those additions have made some of Disney’s more recent live-action fairytales very popular, and they hope bringing those elements to this classic tale does the same.

While the first trailer to The Nutcracker was quite vague, this new piece of footage gives us everything we need to know about the upcoming holiday film. Unfortunately, it all feels incredibly familiar. The set pieces are gorgeous and the costume design is outrageous, but the story, characters and overall feel of the film just seems like something we’ve seen from the studio before. I do hope I’m wrong, I really do because of how much fun this story could actually be, but it all feels too damn repetitive for my liking.

Check out the brand new trailer below, and make sure to leave your thoughts in the comments! How do you feel about my comments? Does it look interesting to you? Do you get that familiar vibe as well? Starring Keira Knightley, Mackenzie Foy, Morgan Freeman and Helen Mira, The Nutcracker and the Four Realms will be released on November 2nd.

All Clara (Mackenzie Foy) wants is a key – a one-of-a-kind key that will unlock a box that holds a priceless gift. A golden thread, presented to her at godfather Drosselmeyer’s (Morgan Freeman) annual holiday party, leads her to the coveted key—which promptly disappears into a strange and mysterious parallel world. It’s there that Clara encounters a soldier named Phillip (Jayden Fowora-Knight), a gang of mice and the regents who preside over three Realms: Land of Snowflakes, Land of Flowers and Land of Sweets. Clara and Phillip must brave the ominous Fourth Realm, home to the tyrant Mother Ginger (Helen Mirren), to retrieve Clara’s key and hopefully return harmony to the unstable world. Starring Keira Knightley as the Sugar Plum Fairy, Disney’s new holiday feature film “The Nutcracker and the Four Realms” is directed by Lasse Hallström and Joe Johnston, and inspired by E.T.A. Hoffmann’s classic tale.