As we reported a while back, Tom Cruise and Jerry Bruckheimer are giving us our long awaited sequel to the 80’s hit Top Gun. While many are iffy on whether or not the sequel 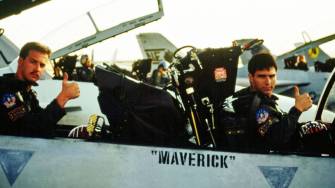 is completely needed, the movie has moved forward and production began last month. The premise for the movie has been reported that Tom Cruise’s character Maverick will be serving as form of a mentor to a new generation of U.S. Navy fighter pilots, one of which is Mavericks old flying buddy Goose’s son. If you remember in the first movie Goose died in a tragic flight accident. It will again be a competition type film with the pilots tackling drone warfare while the story furthers Tom Cruise’s Maverick story. Also Val Kimer is set to reprise his role as Iceman.

With that it leads us to the important role being cast….Goose’s son. Tom Cruise, Jerry Bruckheimer and David Ellison have reportedly been testing actors for the role including  Dylan O’Brien and Austin Butler but they seem to have narrowed their choices down to three.

First up is Miles Teller who many know from movies such as Only The Brave and Thank You For Your Service. He has worked with director Joesph Kosinski before which could give him and edge to the others but a big name like his could draw away from Tom Cruise’s Maverick but still the two actors could be a draw for audiences.

Second is Nicholas Hoult who you may know from movies like Mad Max: Fury Road and the newer versions of the X-Men franchise. Hoult is a great actor too, but may not draw the name sake such as Miles Teller.

Lastly there is Glen Powell who you may know from Hidden Figures and Netflix’s Set It Up. May are considering him the popular underdog for the role as he may not be as popular as Teller and Hoult, but his likable acting would play well when channeling the son of Goose.

So there you have it folks. One of these three may very well be the newest member of the cast. Top Gun 2 is scheduled for a July 12, 2019 release. Let us know what you think in the comments below!