Deadpool 2 ins’t only bringing back the merc with a mouth back to the big screen, it’s also introducing a butt load of fancy new characters that will form the R-rated super-group known as X-Force. Now the Deadpool character is Fox’s bread and butter right now. His first movie was an instant hit, and more than anyone ever thought it would be, and the sequel looks to top that. But with the long-awaited X-Force movie on the horizon and the team being introducing in Deadpool 2, is a third Deadpool movie going to happen or even necessary?

The first full-length trailer for Deadpool 2 had a little bit at the end featuring Ryan Reynolds’ Wade Wilson and T.J. Miller’s Weasel as they joked about a sequel and why make a crappy third and not just finish strong with a first sequel. Well, that very well could happen as Ryan Reynolds himself, who recently sat down with Entertainment Weekly, had this to say about a third Deadpool:

“I don’t know that there would be a Deadpool 3. I really don’t,” says Reynolds. “I feel like the character, in order for him to function properly within his own universe, you need to take everything away from him. I don’t think that you can keep doing that. I do see him as being a part of X-Force, obviously. I would love to see him in a team-up sort of thing, like a mano a mano or a great female character from the X-Men universe. I just think if you’re going to do another Deadpool solo film, you’ve got to really, like, get that budget down to nothing and just swing for the fences, and break all kinds of weird barriers, and do stuff that no one else can do.”

Other than Rob Liefeld, the creator of Deadpool, Ryan Reynolds knows this character best, which is why I love this comments. My biggest scare about the sequel is that it’ll feel too much like the original. The story and characters are clearly different, but as far as the comedy beats and Deadpool himself, I’m nervous that we might get too much of the same.

With that said, I’m still very much looking forward to the movie and seeing this character back on the big screen and interacting with all these weirdos around him. And if they are able to pull it off again, and since he’s already set to appear in X-Force, a third movie isn’t necessary. Let him function in something completely different like X-Force, in the hands of someone new like Drew Goddard. You have to be able to give this character a different setting every time we see him, and we’d get that in a X-Force movie or two, rather than a Deadpool 3.

Then there’s the whole Disney-Fox aspect of it all. Maybe Reynolds has already had conversations with some people at Disney and Marvel and they have certain plans for the character that wouldn’t allow a third movie. They might take the character in a complete different direction, which may be something that Reynolds himself isn’t on board with: “Why do they all have to be big comic book movies? It could be anything. Deadpool could be a Sundance film.”

What do you think about Reynolds’ comments? Do you like the idea of Deadpool leading the X-Force franchise going forward or do you want his solo movies too? What about the MCU thing? Do you hope they take advantage of that and if so, which character(s) do you want to see him interact with? Also, make sure to check out this brand new batch of images for the sequel! Also starring Josh Brolin, Zazie Beetz, Morena Bacarin, T.J. Miller, Brianna Hildebrand, Terry Crews and Bill Skarsgard, David Leitch’s Deadpool 2 arrives on May 18th. 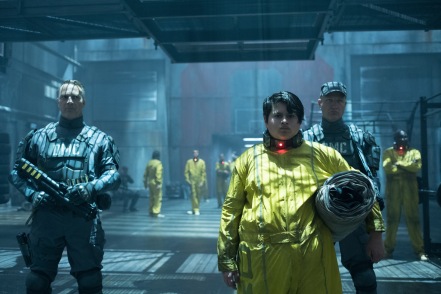