In June of 2015 we got our first movie featuring Ant-Man. To many this was a surprise and shocking that Marvel would choose to pick such an unpopular character not to mention, not even using the most popular version of Ant-Man, Hank Pym. Even more surprising was the casting for this movie. Paul Rudd was chosen as Scott Lang / Ant-Man to many peoples shock. The rest of the cast was as followed: Evangeline Lilly as Hope van Dyne, Michael Douglas as Hank Pym, Corey Stoll as Darren Cross / Yellowjackets, Bobby Cannavale as Paxton, Michael Peña as Luis, Tip “T.I.” Harris as Dave, Anthony Mackie as Sam Wilson / Falcon, Judy Greer as Maggie: Lang’s estranged former wife, Abby Ryder Fortson as Cassie, the daughter of Lang and Maggie.

The movie starts of in 1989 where Hank Pym has resigned from S.H.I.E.L.D. after

discovering that they are trying to duplicate his Ant-Man shrinking technology. He believes his technology is too dangerous and vows to keep it hidden. In present day, Hank Pym’s estranged daughter Hope van Dyne, and his former protégé, Darren Cross, have forced Hank out of his own company, Pym Technologies. Cross is very close to perfecting Hanks shrinking technology called, The Yellowjackets.

Otherwhere in San Francisco, a well-meaning their, Scott Lang has been released from prison and is moving in with his old cellmate Luis. Lang visits his daughter, Cassie, unbeknownst to his ex-wife Maggie and police detective fiance, Paxton, who are upset he doesn’t provide child support. Unable to keep a job due to his past, Lang agrees to join Luis’ crew to commit a burglary. Lang breaks into a house and cracks its safe, only to find a old motorcycle suit, which he takes home. Once at home he tries on the suit which shrinks him down to the size of an insect. Terrified by what happened, he returns the suit to the house only to be arrested. The house belongs to Pym, who later visits him in jail and smuggles the suit in to help break him out.

Pym, unbeknownst to Lang, manipulated Luis into getting Lang to steal the suit. Pym wants Lang to become the new Ant-Man to steal the Yellowjacket suit from Darren Cross. 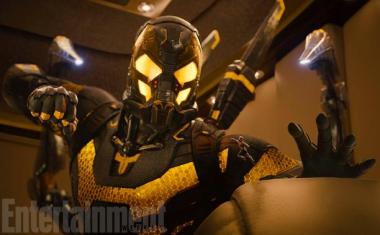 It is then found out that Hope van Dyne has been spying on Cross and decides to help her father train Lang to fight and control ants. Hope van Dyne, still holds resentment to her father over the death of their mother Janet. Pym reveals that her mother was known as the Wasp. She disappeared disappeared into a subatomic Quantum Realm while disabling a Soviet nuclear missile. Pym warns that the same could happen if he overrides the suits regulator. They then send Lang to steal a device from Avengers headquarters where he encounters Sam Wilson/Falcon and a fight ensues.

Cross perfects the Yellowjacket suit and hosts a revealing ceremony at Pym Technologies headquarters. Lang, along with his crew and a swarm of flying ants, infiltrates the building during the event, sabotages the company’s servers, and plants explosives. When Lang tries to steal the Yellowjacket suit, he along with Hank and Hope, are captured by Cross, who intends to sell the Ant-Man suit and the Yellowjacket suit to Hydra. Lang and Hope break free fighting Hydra agents but one gets away with a vial of Cross’ particles

and Hank Pym is shot. Lang pursues Cross, while the Pym Technologies building explodes as Hank and Hope escape.

Cross puts on the Yellowjacket suit and fights Lang in his Ant-Man suit but is arrested by Paxton. Yellowjacket then takes Lang’s daughter, Cassie, hostage to get Lang to fight him.  Lang overrides the regulator and shrinks to subatomic size to penetrate Cross’ suit and sabotage it to shrink uncontrollably, killing Cross. Lang disappears into the Quantum Realm but manages to reverse the effects and returns to the macroscopic world. To thank Lang, Paxton covers for him to keep him out of prison. Seeing that Lang survived the Quantum Realm, Pym wonders if his wife, Janet, is still alive. Later, Lang meets up with his friend Luis, who tells him Sam Wilson/ Falcon is looking for him.In a mid-credits scene, Pym shows van Dyne a new Wasp prototype suit and offers it to her. In a post-credits scene, Sam Wilson/ Falcon and Steve Rogers/ Captain America have Bucky Barnes/ Winter Soldier in their custody. Unable to contact Tony Stark because of Sokovia Accords, Sam Wilson mentions that he knows someone who can help.

Ant-Man was one of those movies that a lot of people had low expectations for because they did’t see where Marvel was going with their direction, myself included. When I heard that they cast Paul Rudd as a superhero character, I thought “What are they doing, this is going to be a major flop!” After seeing it and the reactions it got from fans, it most definitely was not a flop. It was something completely different but really enjoyable. I know myself included was happy to be wrong on this movie and cannot wait for the sequel Ant-Man and the Wasp coming out on July 6th.

So what do you think? Do you agree with the ranking of Ant-Man? Should it be higher or lower? Let us know in the comments below!