Warner Bros. has released the second official trailer for their upcoming highly anticipated spinoff Ocean’s 8. The Gary Ross film is a spinoff of the Steven Soderbergh franchise that starred George Clooney, Brad Pitt, Matt Damon and other big name co-stars. Soderbergh returns as producer for this film. This new take on the Ocean franchise follows Sandra Bullock as Debbie Ocean, sister to Goerge Clooney’s Dnany Ocean of 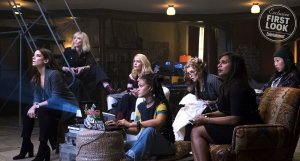 the originals, as she sets out to pull the biggest heist of her life just as she’s released from prison. Assembling an all-female all-star cast, the teams goals is to steal $150 million in diamonds off the neck of a world famous actress, played by Anne Hathaway, at the world famous Met Gala.

I’ll be honest, I wasn’t too sure about this movie in the beginning. While the cast is absolutely fantastic, I’ve been very cautious of the whole gender-swapping craze happening in Hollywood lately. That still may be the case a bit, but this movie looks like a whole hell of a lot of fun, and a lot of that appeal comes from two major pieces. First is the cast. Without the bringing together of not just great actresses, but uniquely different actresses creates a lot of interest. Secondly and most important is the tone. You don’t want this movie just being a Soderbergh copycat, but you also want it staying very close in tone and keeping the spirit of those films. So far, Ross seems to have captured that perfectly, which should make for a very fun theater experience.

Watch the new trailer below, and make sure to leave your thoughts in the comments! Do you feel the same as I do? Anything you don’t like about the trailer? Ross’ Ocean’s 8 also stars Cate Blanchett, Mindy Kaling, Awkwafina, Sarah Paulson, Rihanna, Helena Bonham Carter, James Corden, and Richard Armitage, Ocean’s 8 opens in theaters on June 8th.

Five years, eight months, 12 days…and counting. That’s how long Debbie Ocean (Sandra Bullock) has been devising the biggest heist of her life. She knows what it’s going to take—a team of the best in their field, starting with her partner-in-crime Lou Miller (Cate Blanchett). Together, they recruit a crew of specialists: jeweler Amita (Kaling); street con Constance (Awkwafina); expert fence Tammy (Paulson); hacker Nine Ball (Rihanna); and fashion designer Rose (Bonham Carter). The target is a cool $150 million dollars in diamonds—diamonds that will be around the neck of world-famous actress Daphne Kluger (Hathaway), who will be centerstage at the event of the year, the Met Gala. The plan is rock solid, but everything will need to be flawless if the team is going to get in and get away with the ice. All in plain sight.