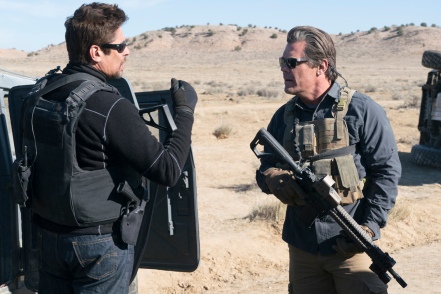 Sony Pictures has revealed a new trailer for the newly titled Sicario: Day of the Soldado. The sequel stars Benicio Del Toro and Josh Brolin, where the story picks up after the events of Sicario where the drug war has reached maximum capacity. After learning that drug cartels are smuggling terrorists across the US border, Brolin and Del Toro are asked to eliminate the problem, using any means necessary.

This is exactly what I wanted from the first trailer. This new footage dives much deeper into the story of the sequel, which comes with much surprise. The footage went on as I expected, but then halfway through it flipped and turned into a way between Brolin and Del Toro, which got me so much more excited for this movie. I was afraid that this sequel would become very similar to the original, trying to replicate what Denis Villeneuve accomplished with the first, but this story looks like it’s taking a hard turn left into unseen territory. I’m so in on seeing Brolin and Del Toro’s characters go to war, especially when they play dirty and with no rules.

Check out the new trailer below and after doing so, leave your thoughts in the comments! Do you like the story twist? How about the new titled change? Are you looking forward to it or were you hoping for just one movie? Directed by Stefano Sollima and also Isabela Moner, Jeffrey Donovan, Manuel Garcia-Rulfo and Catherine Keener, Sicario: Day of the Soldado will be released on June 29th.

In SICARIO, Day of the Soldado, the series begins a new chapter. In the drug war, there are no rules – and as the cartels have begun trafficking terrorists across the US border, federal agent Matt Graver (Josh Brolin) calls on the mysterious Alejandro (Benicio Del Toro), whose family was murdered by a cartel kingpin, to escalate the war in nefarious ways. Alejandro kidnaps the kingpin’s daughter to inflame the conflict – but when the girl is seen as collateral damage, her fate will come between the two men as they question everything they are fighting for.