Here’s Your First Look at the Deleted Scenes for the ‘Star Wars: The Last Jedi’ Blu-Ray

It’s been over two months since Star Wars: The Last Jedi was released in theaters, but the film is still finding ways to surprise us. The blu-ray is set to hit home release in just a matter of weeks and in anticipation, Entertainment Weekly has revealed an exclusive sneak peek at just a few of the deleted scenes that will be included on the blu-ray.

There will be a total of 14 deleted scenes on the blu-ray. Some deleted scenes become fan service and others are just an extension of other important moments of the film, but writer/director Rian Johnson says that each of these weren’t cut because they didn’t work, rather because the film was just better without them:

“I love each one of the scenes individually. I mean, every single one of them was not cut because it didn’t work. It was cut because the movie as a whole was better without it,” Johnson tells us. “So with each one of them, it’s that strange combination where it feels awful to cut it, but it feels good to cut it, because suddenly the pacing of a section of the movie feels much better, or suddenly the film is cleaner, or clearer, in many different ways.”

For Finn in The Last Jedi, he struggled in the beginning of the film to either stay with the Resistance or go after the only friend he’s ever had, Rey. In the first deleted scene, our favorite little ball droid rolls up on Finn and shows him a hologram of he and Rey’s emotional goodbye at the end of The Force Awakens as he lays unconscious after being sliced up by Kylo Ren. Johnson says the original  idea behind the scene was to remind us, as viewers, of Finn and Rey’s friendship:

“I was looking for any opportunity I could to emotionally connect those two,” the director says. “I thought it was a really sweet little scene. I loved John Boyega’s performance in it. Ultimately it was meant to explain his motivation for going [to find Rey and quit the Resistance], but we realized that you understood his motivation, because he tells it to Rose. Once we realized we could get away without it, it was something that just naturally fell away.”

He also goes on to mention how it shows the mischievous personality of BB-8, saying: “Little sneak. You’ve got to watch what you’re saying around BB-8. It’s all on the record.” 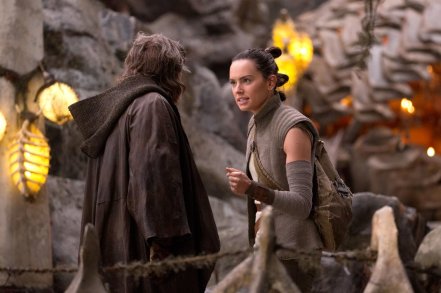 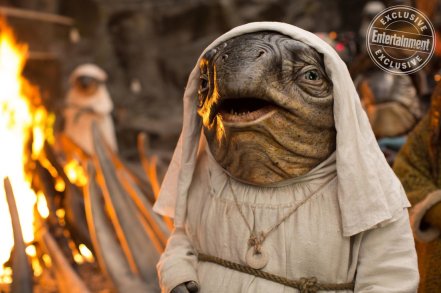 Luke’s training to Rey was one of the most anticipated aspects of The Last Jedi. It was arguably the heart of the film and the result definitely wasn’t what most fans were expecting to see. In this deleted scene, we get a much different look at Rey’s time on Ahch-To.

Following their lesson in the temple that overlooks the waters of Ahch-To, Rey sees moving lights, by the sea, headed towards the village inhabited by amphibian “nuns” who keep up the old Jedi structures. Luke explains to Rey who they are, and while she is just waiting to ignite her saber to protect the caretakers, Luke warns her what would happen if she did, and how the tribe would just come back bigger and stronger, and possibly when she’s gone.

The scene that follows is the beautiful shot of Rey sprinting down the shoreline, lightsaber ignited in hand. At this moment, Luke is calling out to her, but she’s done listening. As Johnson explains, this is the moment Rey realizes she can’t fully trust Luke anymore:

“Originally it was just a breaking point for her. Okay, he’s gone too far,” Johnson says. “This is the point where she finally says, ‘Okay, if you’re not gonna help, then I’ve wasted too much time here.”

Johnson goes on to say that not only did he think the division would be necessary to drive Rey towards Kylo Ren, but also removing the scene entirely leads to a completely different set-up that hurts Luke even more:

“In her next-to-last Force connection she has with Kylo, which is the very intense one, the context for that was her coming off this rejection and angry moment with Luke,” Johnson says. “When we take that segment out, suddenly she’s coming into that Force connection after leaving things in a hopeful place with Luke, at the end of the temple lesson.”

“It’s much more of a crushing reversal when Luke finds her in the hut [talking to Kylo,]” Johnson says. “You get the sense that she and Luke were actually making progress, as opposed to, oh, things were screwed up.”

From the moment Luke arrived on screen in the film, it was clear that this was a very different and completely closed off version of the character we’ve known for decades. As the film unravels, we begin to learn why he has shut himself off from the world and everyone/everything he loves. But, the choice to close off from the Force entirely means that he didn’t feel the death of Han, his best friend. In this deleted scene, we see his reaction after learning the hard truth.

Following closing the door to his stone home, sitting in silence and eyes filling with tears, the scene cuts to his sister Leia in a similar position next to a window on the Resistance ship Raddus. Why is this relevant you may ask? The scene is meant to suggest that the Skywalker twins are sharing a moment of grief over the loss of Solo:

“It’s both of them having the connection, and that also then led you to think that Leia was thinking about Han’s death,” Johnson says. “It was a really lovely moment.”

But in the editing room, Johnson explains that they decided that it would be better for the film to stay on the island rather than shifting the story back to the Resistance ship. The cost? An emotional moment that didn’t just connect Luke and Leia once again, but with Star Wars fans everywhere as we are all still grieving the loss of our favorite smuggler:

“We realized just for pacing in that section we had to stick with Rey and Luke, and we wanted just to go straight from him slamming the door of the hut into the day-in-the-life montage, of him going around the island. Taking that bit out suddenly propelled us forward into that segment in a way that just felt much better for the film.”

“I was very sorry to lose it. I think it’s a beautiful performance from Mark Hamill,” Johnson says. “But I think that we get a similar beat with him, later when he’s in the Falcon with R2.”

Two other scene that were included in EW’s reveal focus on time on Supreme Leader Snoke’s starship, the Supremacy. The first scene followings Finn, Rose, DJ and BB-8 on their mission to shut down the tracking divide aboard the ship. The scene in the movie is quite short once they get on the ship, with this deleted scene being the bulk of it.

The final scene might be the biggest of them all, as it changes the perception of Captain Phasma in The Last Jedi completely. Johnson explains that the version in the movie is the result of reshoots, and originally, he had a much different end for the chrome stormtrooper.

How excited are you to get your hands on The Last Jedi blu-ray? Which scene out of these 5 are you looking forward to the most? Would you have rather seen these in the movie or not? Star Wars: The Last Jedi will be available on home video March 27th.