Welp, we’ve been begging and pleading for weeks now to see anything on the upcoming Han Solo spinoff, titled Solo: A Star Wars Story. As rumors were circulating about a possible Super Bowl drop, that ended up being true as a 30 second spot was released during the first half of yesterday’s big game. But that’s not all. As promised, the first full-length trailer arrived this morning on Good Morning America,

which was soon after followed by the spinoffs first batch of character posters.

These are so pretty awesome character posters. The design and color different between each of them is a big standout. Of course, Alden Ehrenreich is giving the classic Han Solo blaster pose. Donald Glover as Lando is already genius, he can do no wrong at this point. I’m really enjoying the involvement of Emilia Clarke at this point. First of all, Qi’ra is an extremely interesting and unique name, and it seems to fit the character after the first trailer. Chewie is Chewie, he can definitely do no wrong.

Now it’ll be interesting to see how these characters are brought together and what possibly splits them apart. Is this a heist movie and they’re the crew? Brought together by Woody Harrelson’s character? We’ve all wondered just how much Donald Glover would be in the movie, but after the trailer and now this poster, it seems as if he’ll be in it the whole time.

With all the issues this film had in production, I’m very happy to see where it has ended up. I think it’s safe to say we’ve all gone from “I don’t know about this movie” to being pretty excited for it. It’s won over the majority of fans by just letting it all out on the table. I’m glad they haven’t held back because of previous backlash, because at the end of the day, it’s still Star Wars. 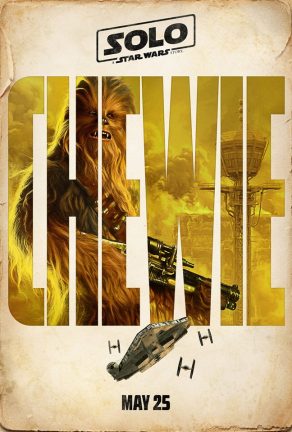