Watch a Trio of New Clips for ‘Maze Runner: The Death Cure’ 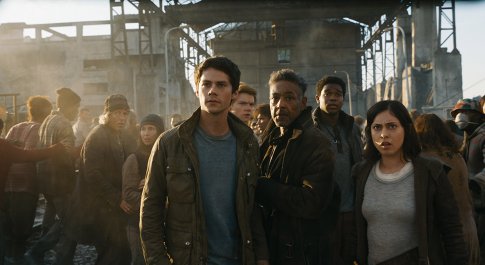 The original plan for the Maze Runner franchise was to release the trilogy in back-to-back-to-back years. That was all on track as the first two did so, until a horrific and almost deadly on-set accident took place with star Dylan O’Brien. Production was suspended, O’Brien went healing and thankfully, the film resumed where it is now set to be released next week.

I’ve, to much of my surprise, enjoyed the Maze Runner movies for what they are. Out of all the young adult franchises to be released over the last number of years, outside of The Hunger Games, in my opinion, this is the best. Director Wes Ball, who has helmed the franchise from the beginning, has stayed close to the source material and taken the story just serious enough to create some pretty thrilling moments. The sequel cliffhanger The Scorch Trials left us on was a particular favorite of mine. It has left me excited for what The Death Cure has to offer, not to mention that the trailers actually look pretty damn decent for a second sequel.

In preparation for its release, Fox has released a trio of clips for The Death Cure. Make sure you check out the new footage, as well as leave your thoughts in the comments section below. Are you ready for one last run with Dylan O’Brien and the other gladers? Or does it look like just another January movie? Ball’s Maze Runner: The Death Cure hits theaters on January 26th and also stars Kaya Scodelario, Thomas Brodie-Sangster, Ki Hong Lee, Nathalie Emmanuel, Walton Goggins, Rosa Salazar, Aidan Gillen, Katherine McNamara, Giancarlo Esposito and Patricia Clarkson.