The upcoming remake of Dune has just been given quite an exciting description. Frank Herbert’s classic 1965 novel, of the same name, received a big screen adaptation in 1984 from David Lynch and starred a pretty impressive cast led by Kyle MacLachlan and Francesa Annis. Although the film heavily underperformed, so much so that Lynch as disowned the film, it has become a cult classic over time, as do 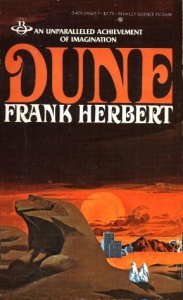 many “so bad they’re good” movies.

Now acclaimed director Denis Villeneuve takes a crack at the property. Villeneuve just released the absolute fantastic Blade Runner 2049, and with that film nearing home video and award consideration, the director looks at Dune as his next go-around. As for what to expect? There are enough redeemable things Villeneuve could use as inspiration from Lynch’s film, but he has previously said that he’s looking at Herbert’s original source material.

At this point, that’s pretty much everything we know about the remake. Luckily, Villeneuve just recently sat down with Fandom to talk about his upcoming adaptation, where he described the movie as something that could sway you one way or the other:

“Most of the main ideas of Star Wars are coming from Dune so it’s going to be a challenge to [tackle] this. The ambition is to do the Star Wars movie I never saw. In a way, it’s Star Wars for adults. We’ll see.”

These comments will either get fans very, very excited or have them question this movie going forward. The truth is, from what I’ve heard and read, the two properties are extremely similar. While they’re both science fiction and set in space, I’ve been told that the comparison to The Lord of the Rings is a little bit stronger than the galaxy far, far away. With a new Star Wars movies arriving every year, the latter might sit well with fans as we haven’t seen Middle Earth on the big screen in a number of years.

Whatever may happen, having Villeneuve involved in any kinds of capacity is a really, really good thing. He’s my favorite working director working right now, and everything he’s touched thus far has been absolute gold for me. While I don’t know how I feel about “Star Wars for adults” per say, I have all the faith in the world in Villeneuve and his ability to differentiate one property from another. Here’s to hoping this adaptation is closer to the original material more than its latter work.