New ‘Ready Player One’ Poster is a Blast from the Past; New Images Go Outside the Oasis

2018 is poised to be a massive weekend festival for geeks everywhere, and while we’ll be turning our heads left and right at comic books movies next year, the most geek film of them all is no doubt Ready Player One. The Steven Spielberg film, which is based off of Ernest Cline’s masterful work of the same name, is ready to give us a trip of nostalgia like no other, with pop culture references of the past and present from head to toe. And just as expected, with so many geek titles in its bones, the marketing for the film looks like it’ll be taking full advantage of it.

The first trailer for the film was exactly that, a walk down nostalgic lane. Full of nods and cameos from Deadpool and Harley Quinn to Akira and Back to the Future and of course The Iron Giant and wonderfully mixed song from Willy Wonka. And that’s just to name a few. While it seems Spielberg has decided to keep his own work out of the film, which is actually different from the source material, the marketing will not be doing the same. The first official poster for the film has debuted ahead of its second trailer drop tomorrow, and in a very cool nod to one of Spielberg’s greatest hits, it holds a heavy resemblance to E.T. the Extra-Terrestrial.

It’s a striking poster, with the use of different shades playing a great contrast to some beautiful looking colors. Now that I know they may be using past success as part of their marketing, I’m all for it. With Spielberg at the helm, why not use his past assets to your advantage? Could you imagine what a Jaws or Close Encounters of the Third Kind inspired poster could look like? I’m in.

As was announced earlier this week, a second trailer will be released tomorrow, and I cannot wait. I’m hoping it dives much more into the conflict going on, but at the same time pretty much reveal nothing. One could hope for the best, right? Until then, check out these brand new images released by Entertainment Weekly, which give us our first look at Olivia Cooke as the character Art3mis, who from what I’ve been told plays a big role in the story, and an even bigger role in the film version. Spielberg’s Ready Player One his theaters on March 30th, 2018 and also stars Tye Sheridan, Simon Pegg, T.J. Miller, Ben Mendelsohn and Mark Rylance. 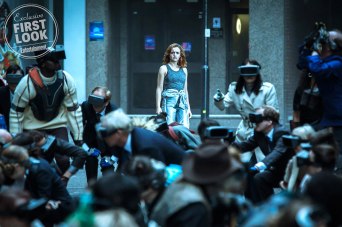