Pacific Rim is one of my favorite monster movies. How director Guillermo del Toro was able to successfully counter-balance the multiple storylines within complete awesomenss monster mayhem was a fun treat for us all. Now unfortunately for us fans who enjoyed the hell out of the movie, the next few years twisted our stomachs as we didn’t really know whether or not a sequel would happen. Thankfully, a sequel 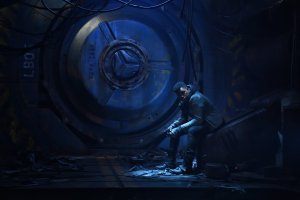 was green-lit not too long ago with Steven S. DeKnight directing and a cast that’s led by FN-2187 himself, John Boyega. Production got to work right away with a short teaser debuting at this past summer’s SDCC. Now, we have a special new treat in the form of a brand new poster.

John Boyega took to instagram just a short time ago and revealed the brand new poster with the caption saying: “Up next!” Now the caption could mean a plethora of things, including the possibility of the first official trailer. That could very well be the case, but we won’t likely know until tomorrow. The other possibility is that he means his next film following that little tiny movie in December called Star Wars: The Last Jedi. Either way, it showcases (but really teases) one thing, the completely badass new look of Gypsy Danger.

While I think that DeKnight has given Gypsy a new name this time around, I can’t WAIT to see this bot back on screen. Gypsy Danger and his story was arguably one of the better parts of the original movie, which included Charlie Hunnam of course. Now with John Boyega’s character, the son of Idris Elba’s character from the first movie, as the jaeger pilot, it shall no doubt be one hell of a ride. I’m absolutely pumped to not just see Boyega in this role, but what kind of new action DeKnight has in store for us. After all, that’s his forte, which makes him qualified for many more action franchises down the road.

If a trailer does end up being dropped this week, make sure to come back here to Apocaflix! to not just watch it, but read our thoughts! For now, gaze over this pretty badass new poster and let me know your thoughts on the poster as well as the movie in the comments. DeKnight’s Pacific Rim: Uprising is set to hit theaters on March 23rd, 2018.